Alejandra is a young girl who lives in Dorado with her mother, likely above their bakery, Panadería Las Nieblas.

As she grew up, Alejandra's mother told her the stories of the Overwatch taskforce who saved the world a generation ago. The time came where she reached the age where she was no longer a child, but not old enough to look after herself. It was on day at this point in her life when her mother sent her out to get some flour. Alejandra obliged, but not without making her frustration at her mother's doting on her quite clear.

As evening fell, she encountered her first obstacle in the form of Los Muertos members beating up an omnic. She tried to sneak past them, but was spotted, and was 'encouraged' to take part in the beating. She tried to wriggle her way out of it, but the members weren't having it. They eventually headed off, but not without robbing her of the money her mother had given her. She ran off after them. Now night, she caught up, but discovered that someone else had found the gang as well, and was in the process of incapacitating their members. She took cover as a gunfight erupted between the gang members and the man attacking them. The gang bore a hasty retreat, but not before one of them lobbed a grenade in the man's direction, the explosive coming to rest at Alejandra's feet. The man managed to shield her from the blast. Asking him why he saved her, he grimly answered that old habits died hard, and told her to head home (after returning her purse to her). She realized that the man was one of the heroes her mother told her about, even as he responded that he wasn't a hero anymore.

With flour and an old Overwatch poster in hand, she returned home in much better spirits, telling her mother about the night's events.[1] She later gave testimony concerning the event, calling the vigilante a hero.[2] 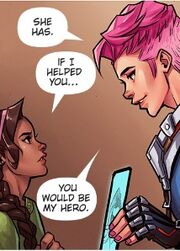 Long after the Los Muertos incident, Alejandra found two visitors in her mother's restaurant. The woman showed her a picture of Sombra, telling her that she'd done a bad thing, and that if she helped her, she'd be her 'hero.' Alejandra directed them to a warehouse that Sombra was residing in.[3]