—Antonio Bartalotti to Gabriel Reyes before his death

Antonio Bartalotti, also going by the name Antonio Giordani, was an influential businessman and high level player in Talon, who orchestrated the attacks on the Oslo Overwatch Facilities in Norway.

His compound in Venice is known as a hotbed of illegal activity. Antonio also had connections to arms smuggling operations. Blackwatch originally planned to kidnap Bartalotti in order to raise charges against him for attacking the Overwatch base in Oslo. Instead, he was killed by Reyes, who knew bringing him in wouldn't do any good. 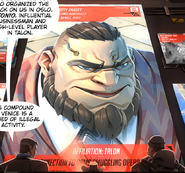 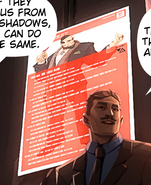 Antonio in his Office

Antonio looking through the window

Antonio getting shot through the window
Add a photo to this gallery
Retrieved from "https://overwatch.fandom.com/wiki/Antonio_Bartalotti?oldid=97330"
Community content is available under CC-BY-SA unless otherwise noted.