The BCRF Charity Event was a limited-time event in which players can obtain themed unlocks centered around donating for charity. The players can unlock these in-game items by paying for them, in which all the proceeds go to the BCRF or The Breast Cancer Research Foundation charity. The Breast Cancer Research Foundation (BCRF) is an independent, not-for-profit organization which has raised $569.4 million to support clinical and translational research on breast cancer at medical institutions in the United States and abroad. BCRF funds over 200 researchers in 6 continents and 13 countries.

On March 8, 2018, The BCRF Charity Event was released. In-game loot includes the Pink Mercy Skin, Ribbon and Pink player icons, and Ribbon, Cure, Together, and Pink Sprays. Real World includes Men's and Woman's Limited-Time shirts based on the Pink Mercy Skin. This event ends May 21, 2018. 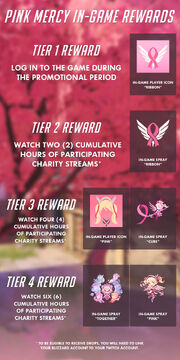 Logging into the game during the promotional period unlocks you the Player Icon "Ribbon". This is also the Tier 1 Reward

With a purchase of $14.99 (not including tax) you can obtain the Pink Mercy skin, which is the focal point of the event. 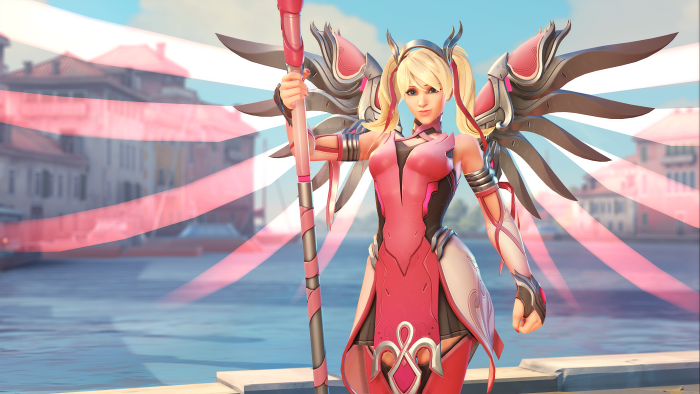 Blizzard Entertainment will donate 100% the proceeds that it receives from all Pink Mercy skin sales to BCRF, with a guaranteed minimum donation of $250,000 (USD). The total donation amount will be disclosed after the campaign concludes on May 21

By watching the designated streamers for a certain number of accumulative hours you can earn exclusive sprays and player icons.

We've also partnered with community artist ONEMEGAWATT to create a series of themed Twitch Drops, including a new player icon and four all-new sprays. Available only during this event, you can earn these special Pink Mercy cosmetics by viewing select streams on Twitch during the two-week promotional period.

Watching an accumulative 2 hours of participating charity streamers will earn you this.

Watching an accumulative 4 hours of participating charity streamers will earn you this.

Watching an accumulative 6 hours of participating charity streamers will earn you this.

Over the 14 days, a cadre of content creators from across the globe will be streaming Overwatch under the pink-ribboned banner of breast cancer research. On designated days, each creator will host a dedicated charity stream on Twitch, and all donations (including Twitch Bits) received during that specific stream will be sent to BCRF.

Check out the schedule below to see who’s participating and when their charity streams will be live:

In addition to streaming for charity, these channels will also have Pink Mercy Twitch Drops enabled any time they stream Overwatch from May 8 to May 21.

There are three Pink Mercy-themed global emotes available, they are all unlocked by cheering any amount of bits to the designated charity streamers during their charity streams

Along with In-Game loot, there are also T-shirts purchasable.

Designed by community artist VICKISIGH, 100% of the proceeds from these t-shirt sales will be donated to BCRF. Head over to the Blizzard Gear Store to learn more and pre-order yours today!