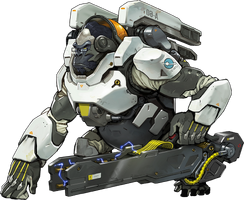 For the information about attacks which is able to pierce through Winston's barrier, see Barrier.

Winston places down a projector that creates a sphere-shaped barrier which has 700 health and a radius of 5 meter around the projector. The projector is affected by gravity; If Winston deploys it in the air, it will drop straight down. The barrier can also be placed on moving objects. It will disappear after 9 seconds, and it can be destroyed earlier. The cooldown begins when the barrier is placed.

Retrieved from "https://overwatch.fandom.com/wiki/Barrier_Projector?oldid=99002"
Community content is available under CC-BY-SA unless otherwise noted.