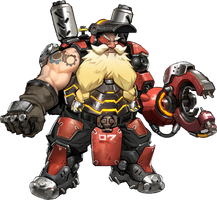 Torbjörn builds a stationary level-1 turret on the ground. The turret must be put at a place which Torbjörn can stand on. The turret will take 3 seconds to be fully deployed; within that 3 seconds, the turret can receive damage and be destroyed. Torbjörn is able to deploy only one turret at any time.

The turret will aim to the nearest enemy and start to project a hitscan fire. The targeted enemy will be marked by a laser trail connecting them and the turret's barrel. The turret will continue to attack its target as long as the target is still in its range, even if there is another closer enemy. It will change its target when the current target is dead, or out of sight.

Torbjörn may hit his turret with the Forge Hammer in order to repair or upgrade it. One swing will heal 50 health. When level-1 turret is at full health, Torbjörn can hit it 5 times to upgrade it to level 2. If Torbjörn activates his ultimate ability, Molten Core, level-2 turret will be automatic upgraded to level 3; during that time, Torbjörn is able to use the hammer to upgrade his level-1 turret to level 3.

The turret only deals 12 damage per shot in console versions of the game.

Retrieved from "https://overwatch.fandom.com/wiki/Build_Turret?oldid=98429"
Community content is available under CC-BY-SA unless otherwise noted.