It's Pride Month with Fandom, and Overwatch's cast has a bit of representation we'd like to highlight: Tracer and Emily, Soldier 76 and Vincent, and Guillermo Portero and Miguel, and Lynx Seventeen. A big thank you to everyone who has helped make those articles and the whole wiki what they are!

There will also be three roundtable discussions in the Fandom Discord server over the month: Discussing LGBTQIA+ video games and characters on June 15, LGBTQIA+ icons and activists on June 22, and a discussion with LGBTQIA+ wiki admins on June 29.

Edit
watch 02:34
Fire Emblem Warriors: Three Hopes - The Loop
Do you like this video?
Play Sound

Cosmetics are items in Overwatch which allow players to customize their heroes and profiles. They do not affect gameplay. There are eight types of cosmetics: Player Icons, Skins, Emotes, Sprays, Voice Lines, Victory Poses, Highlight Intros, and Weapon Skins. Cosmetics are unlocked by opening them in loot boxes, or buying them with credits or competitive points. There are 4509 cosmetics for Overwatch (2025 of which are only available during various events).

Note: Cosmetics bought with competitive points do not have a known rarity system.

Players gain experience by completing matches in any game mode. The amount of experience players earn per game varies based on a number of factors. After gaining enough experience, players will level up and receive a loot box. After reaching level 100, players will gain a star under their portrait and restart at level 1. Experience needed to level up is gradually increased from levels 1-100. The amount of experience needed to reach levels after 100 is constant (20,000 XP) and will no longer reset after each promotion.[1]

In Quick Play and Arcade, you gain XP from completing the following actions:

†You will only earn XP for the highest medal achieved.

In Play vs A.I., you gain XP from completing the following actions (all are increased by 20% when playing in a group): 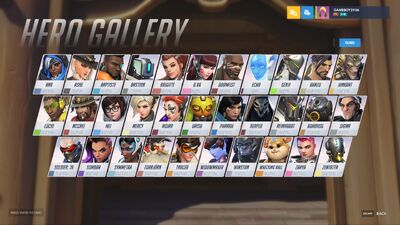 The Hero Gallery is where players customize their heroes, view items they’ve unlocked, and spend

To access the Hero Gallery, navigate to the game's main menu and click on Hero Gallery. From the gallery, you can select the hero you'd like to customize, and then see all of the skins, emotes, victory poses, voice lines, sprays, and highlight intros available for that hero. Equip an item you want to use from your collection, or click the "Unlock" button to spend credits and unlock that skin or spray you've been eyeing. Changing your player icon must be done through the Career Profile > Player Icons page.