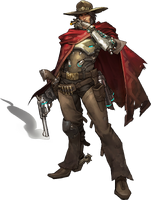 McCree takes a few seconds to lock on to each target he has a line of sight to. During this time, his movement is drastically slowed and is vulnerable to stun, sleep and damage.

A red skull will appear over enemies that are fully targeted. Targets with a red skull over them will be instantly killed. It is important to note that Deadeye will NOT lock onto Symmetra's turrets, teleporters, Törbjorn's turret, or Mei's Cryo Freeze.

Though enemies may be targeted through barriers, the shots will not pierce them. Despite the skull appearing, the damage will continue to increase, this can be useful for hitting multiple targets behind barriers, as several insane damage shots can all hit the barrier and quickly destroy it when held for long enough. Though this tactic has its rare moments, it is not recommended for frequent usage.

The locking progress will still remain even if the target is out of sight and will be continued when the target is return to the line of sight. It means a red skull target will not lose the skull mark even if they go into hiding. McCree can also turn him while firing in order to get moving enemies.

A McCree on the enemy team and player-controlled McCree will say "It's high noon", while an allied McCree says "Step right up." The ability also spawns a tumbleweed that passes McCree, a reference to classic cowboy quick-draws portrayed in films and media.

Retrieved from "https://overwatch.fandom.com/wiki/Deadeye?oldid=99879"
Community content is available under CC-BY-SA unless otherwise noted.