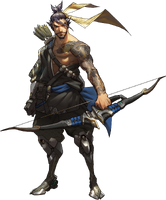 Hanzo fires an arrow that, after traveling 10 meters, becomes a pair of dragons that spiral around each other while flying forward and continue forward forever. The arrow and dragons are not stopped by walls, enemies, or barriers, however, the arrow can be absorbed, deflected, or negated before it unleashes the dragons. Enemies making contact with both dragons will take roughly 300 damage per second. The attack has a "safe zone" at 10.5 meters from the arrow's starting position; enemies standing in the area will not take damage from either the arrow or the dragons.

The dragons will not damage built objects, which include:

A Hanzo on the enemy team as well as player-controlled Hanzo will shout "龍が我が敵を喰らう！", while an allied Hanzo shouts "Let the dragon consume you!"

Retrieved from "https://overwatch.fandom.com/wiki/Dragonstrike?oldid=102820"
Community content is available under CC-BY-SA unless otherwise noted.