Efi Oladele (full name: Efi Rotìmí Opèyèmi Oluwadaré Gabrielle Oladele)[1] is an inventor from Numbani with notable achievements in robotics and artificial intelligence, including the creation of Orisa.[2]

Efi is very intelligent. She is exceptionally skilled in the field of robotics, but is also skilled in mathematics (including algebra, geometry, and calculus) and science (including physics). However, she has dreadful crafting skills, being much more at home with wire and circuit boards than glue and paper.[1]

She is an admirer of Overwatch, and is a fan of Lúcio's music,[2] with her favorite song of his being We Move Together As One. She was originally a fan of Tonal Abyss, but lost interest in the group.

Efi highly regards Gabrielle Adawe. She can read some Omnicode and is a skilled gamer, but drifted away from the hobby as she focused on robotics instead.[1]

Efi wears her hair naturally, in a ponytail. She originally had bangs, but they were caught up in one of her robots' motors.[1]

This section is a stub section. You can help by adding any available information to this section.

Efi was interested in robotics from a young age. While other kids her age played with building blocks, she was already creating robots. As a toddler, while she'd initially been given gifts such as plushies and talking dolls, she ended up dissecting the toys, turning the electronics into actuators and sensors. Once she understood how they worked, she began creating her own devices. At first, her parents hadn't been happy about it (since the toys hadn't been cheap), but one day, they bought Efi her first plastic robotics kit for her fourth birthday. She used it to make Sparky Bot.[1] Moving on from there, Efi became obsessed with putting together little drones. When she started to get good at it, she tried to build robots to do her chores and help around the house[3] (such as Chore Bot), and also built drones to help her neighbors. Her cousin Bisi gave her carbon-steel tools as a gift further on down the line. She got on well with him and Dayo (Bisi's brother).

Efi attended every Unity Day celebration since she was born.

In her childhood, Efi and her family had to deal with Doomfist's attacks on Numbani. Her parents had a "Super Family Fun Time" game, where they would drop everything and rush into their flat's interior bathroom over the blare of warning sirens. They let Efi indulge in sugary snacks and allow her to watch Overwatch cartoons on her tablet. However, despite her parents' efforts, she never felt at ease during these times.

At school, her closest friends were Naade and Hassana; they became best friends after a science fair incident with a graviton beam. She'd asked them to serve as volunteers. However, she accidentally over-amplified the gravity field, and the result was that they were stuck on the floor of their school library for three hours before they were able to be freed.

When Efi began elementary school, she started taking advanced maths and science classes. Halfway through her first year, she was placed in junior-high classes. At the end of the following year, she'd taught herself algebra and geometry. She ended up taking International Baccalaureate classes after lunch, receiving instruction in calculus and physics. She managed to stay close with Naade and Hassana, but this resulted in an emotional as well as intellectual gap, as she was unable to share their experiences. Furthermore, she noted that while Naade and Hassana were her best friends, Naade and Hassana themselves only seemed to tolerate each other's company.[1]

The Hero of Numbani[edit | edit source]

This section is a stub section. You can help by adding any available information to this section.

By the age of eleven, Efi had put together an impressive resume in robotics and artificial intelligence.[3] Most of her days were spent either in school or in her workshop. At school, she could rely on her cousin, Dayo, for support, but she was distant from the other IB students, as in her experience, teenagers didn't like being shown up by an eleven year-old who was still further along in the curiculum than they were.

While her mother was supportive of her, she wished Efi would spend more time in more traditional recreational activities. For Efi, the creation of robots was recreational in of itself, but for those around her, it appeared as if she was working herself to the bone.

Efi set up her own robotics business (of sorts) as she developed junior assistant (Junie) robots, advertising her services on HollaGram. Naade and Hassana helped her with the robots' construction. However, they had to work out the bugs, and Efi had a long list of customers who'd already put in orders. They managed to create twelve Junies, and Efi gave her friends one each. In part to help boost sales, in part to make it easier to keep up with her friends.

While on the tram, heading home, Efi went on the Free Thinkers website; the place where she obtained most of her source code. There, she stumbled across an advertisment for the Adawe Foundation Fellowship[1] (a.k.a. its "genius grant"),[3] which was a grant for robotics. She noted that the grant was for teachers only, and was disheartened. While she often came across ads for such grants on the site, she found that she never seemed to meet the qualifications for candidacy. However, just before she logged out, her inbox received a message from an anonymous source, telling her that she'd been nominated for the fellowship. She initially suspected that it was malware, but going through it, realized that the email lacked any hallmarkers of spam. It was too personalized for that, and following the link, it took her to the genuine Adawe Foundation website. Whoever "Anonymous088503" was, they were genuine in nominating her. Problem was, however, she only had until midnight to make her submission.

Arriving home, Efi had a quick dinner, told her parents about the grant, and began preparing her pitch. However, writing an essay got her nowhere, as while she was skilled in math and science, she'd only just started learning language arts. Still, the pitch didn't require to be in written form, so she instead made a video pitch, highlighting her past inventions and her current Junie design. She submitted it with minutes to spare.

Over the next five weeks, Efi continued to meet an ever-escalating demand for her Junies. Feeling isolated from her friends, Dayo offered her a place in the drama club he was part of. She offered to take part in making props. During the conversation that followed, Efi claimed that she'd be going to Brazil, to see a concert performed by Lúcio in Rio de Janeiro. A lie, as the case was, as even if she got the grant, her parents had never said anything about taking a trip across the Atlantic. She headed off, claiming that she had a tram to catch.

Dayo followed her, telling her to not worry about; to come back in and just tell the truth. Efi was willing to do so, but it was at this point that she got a notification on her tablet, informing her that she'd won the grant. Experiencing great joy, she figured that she didn't need to correct her story—she was going to Brazil, and her parents couldn't say no.

Efi posted the news on HollaGram, to much rejoicing. However, her parents weren't enthused about the idea of going to Brazil, pointing out that Lagos would be a better option. Efi pressed her case, such as that she'd never been on a plane before, and her parents agreed to think about it. They ended up agreeing. and Efi spent the next few weeks preparing for the trip, both mentally and in terms of her itinerary. Naade and Hassana were also going to come.[1]

The month after she received the "genius grant," Efi was interviewed by Atlas News in their "Spotlight on Numbani" segment. When asked as to what she would do with her grant, she avoided answering the question, but did confirm that her parents would be taking her on a trip to celebrate, in what would be her first time flying.[3]

The Oladeles and Efi's friends left their appartment on Unity Day, which meant that their taxi took awhile to get to the airport, due to the streets' congestion. Looking out of the cab, Efi noticed the tension between humans and omnics, however slight, not to mention the security guards. There'd been some rumors that the event would be postponed due to an anonymous threat, but the citizens had promised to show up whether the event was cancelled or not. Eventually, they arrived at Numbani Airport at the Adawe International Terminal. Progress was slow due to the heightened security presence, so to pass the time, she played on one of her laptops. Suddenly, the screen flickered, shifted a few centimeters sideways, then snapped back in palce, leaving a magenta ghost image behind. Checking the wireless connections, they blinked out, until only one remained—344X-Azucar. However, she was distracted, and the wireless option disappeared before she could select it.

Looking around, she saw Doomfist's gauntlet being escorted on its way to the Numbani Heritage Museum. Suddenly, an explosion tore through the terminal, followed by another. Efi was dazed, but not injured. OR15s were deployed, ordering the assailant to stand down. In the chaos, Efi saw a teenager pinned down by a hunk of fallen concrete, and said that they had to help him. Her mother held her back, telling her to let the OR15s handle it. As they hunkered down, Efi used her Junie to explore the chaos, and through its feed, saw Doomfist, easily destroying the OR15s sent against him. She sent the Junie closer, hoping to distract Doomfist with it. She used it to display a hologram of Akinjide Adeyemi (Doomfist's long deceased mentor), and for a moment, he was caught offguard. However, he quickly realized it was a hologram, and destroyed the Junie, the rest of the OR15s, and escaped with his gauntlet.[1] Efi took a photograph of the damage, which was later circulated by Atlas News.[4]

After the attack, Efi and her parents were interviewed by the Numbani Civic Defense Department, where she gave them the footage she had taken of the attack. She also told them about the wireless option that had briefly appeared on her laptop. The officer called her a hero, but there was the question of what was next. Keeping in mind that she'd received the full quarterly installment of the genius grant, Efi said that she wanted to buy one of the destroyed OR15s. The officers refused, pointing out Efi's age, that the OR15s were dangerous, and that they were expensive. However, one of them slipped Efi an address—4/27 Alatise Parkway. Looking it up, she realized that it was an auction house.[1]

Having built robots all her life, Efi felt the need to build something greater than her original bots—a "true guardian of Numbani."[5]

Orisa is activated for the first time

Sometime later, Efi posted an image on her holovid channel, captioned "Time to get to work!", that showed a list of items she was gathering for an unknown purpose.[6] The parts were used to construct Orisa, an upgraded and advanced OR15 with the added touch of personality. Orisa was constructed from an OR15 chassis bought from the civil government with most of Efi's grant money, and the allowance of her open-minded parents. Efi sought to create a robot that would act as the hero Numbani needed, and fulfill the initial well-meant intentions of the OR15.[7]

At some point after Doomfist's escape, Efi was scheduled to appear at the Numbani Heritage Museum.[8] 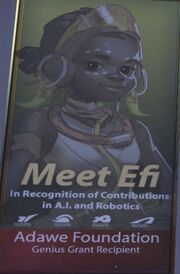 An ad for Efi's appearance