Difference between revisions of "Emily"

Emily is Tracer's girlfriend. The two share an apartment together in London. 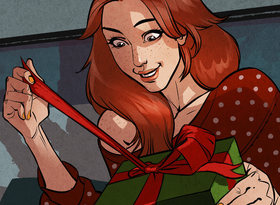 Emily opens the gift from Tracer

On the night Tracer failed to get Emily a present for Christmas, Emily, who had prepared some tea for the two of them, reassured Tracer by telling her to not worry about it, and that she tried to do too much with her already hectic life. Emily noticed a decorated box tied with a ribbon upon the coffee table that, unknowing to her, Tracer had received from a young girl for helping her family earlier that night. Emily then asked if it was for her, and in her excitement, she opened it, ignoring Tracer's nervous protest that it was not originally meant for her. To Tracer's surprise, it was exactly what Emily wanted; a dark greenish scarf with a dark shade design. Happily, Emily kissed Tracer.

At Watchpoint: Gibraltar, Winston, who had been waiting for Tracer's arrival, gave up waiting and told Athena that it must just be the two of them tonight. Athena then told Winston somebody had arrived at the door, and both Tracer and Emily greet "the big guy." They embraced him in a group hug, then all happily sat to eat dinner.[1]