Genji is one of the heroes in Overwatch. He is a cyborg ninja who has freed himself from his criminal past and the war with his cybernetic body.

Genji flings precise and deadly Shurikens at his targets and uses his technologically-advanced wakizashi to deflect projectiles or deliver a Swift Strike that cuts down enemies.

The cyborg Genji Shimada has made peace with the augmented body he once rejected, and in doing so, he has discovered a higher humanity.

As the youngest son of the master of the Shimada ninja clan, Genji lived a life of luxury and privilege. He had little interest in the family's illegal businesses, and although he excelled at and enjoyed his ninja training, he spent most of his time pursuing a playboy lifestyle. Many within the clan considered the carefree Genji to be a dangerous liability, and they resented his father for coddling and protecting him. Following the clan leader's untimely death, Genji's older brother, Hanzo, demanded that Genji take a more active role in their late father's empire. Genji refused, enraging Hanzo. The tension between the brothers built to a violent confrontation that left Genji on the verge of dying.

Hanzo believed that he had killed his brother, but Genji was rescued by Overwatch and the intervention of Dr. Angela Ziegler. The global force saw Genji as a potential asset in its ongoing operations to combat the Shimada clan. As Genji's injuries left him clinging to life, Overwatch offered to rebuild his body in exchange for his help. He was put through an extensive process of cyberization, which enhanced his natural speed and agility and augmented his superlative ninja skills. Transformed into a living weapon, Genji single-mindedly set about the task of dismantling his family's criminal empire.

But as time passed, Genji felt increasingly at war with himself. He was repulsed by the mechanical parts of his body and could not come to grips with what he had become. When his mission was complete, he abandoned Overwatch and wandered the world in search of meaning. He drifted for many years before crossing paths with the omnic monk Zenyatta. Though Genji initially rejected Zenyatta's wisdom, the benevolent omnic would not be deterred. In time, Zenyatta became his mentor, and under the monk's tutelage, Genji reconciled his dual existence as both man and machine. He learned to accept that although he had a cyborg body, his human soul was intact, and he came to see his new form as a gift and a unique strength.

Now, for the first time in his life, Genji is free. Even he cannot say where his path will ultimately lead.

Deflect
Ranged counterattack type
Lasts 2 seconds
8-second cooldown
With lightning-quick swipes of his sword, Genji reflects any oncoming projectiles and can send them rebounding towards his enemies.
Default Key: (

Cyber-Agility
Non-damaging movement type
Thanks to his cybernetic abilities, Genji can climb walls and perform jumps in mid-air.
Default Key: (

Genji brandishes his katana for a brief period of time. Until he sheathes his sword, Genji can deliver killing strikes to any targets within his reach.

For all of Genji's skins and weapons, see Genji/Skins and Weapons.

One purchase of an alternate weapon skin will apply to the Shuriken, Wakizashi, and Dragonblade of all unlocked skins when equipping it.

Their Own Worst Enemy

Kill 2 enemies with a single use of Genji's Deflect in Quick or Competitive Play.
Reward: Pixel Spray

Kill 4 enemies with a single use of Genji's Dragonblade in Quick or Competitive Play.
Reward: Cute Spray

Genji was born into the Shimada Empire as the second child of Sojiro Shimada, who is the master of his clan, three years after his brother Hanzo[2]. As the younger child, Genji inherited the clan's wealth and power without any responsibilities. His body, which was small and diminutive, earned him the nickname of "Sparrow" from his father.[2] Though he was trained in sword fighting, Genji was able to enjoy a frivolous lifestyle.

Most of the clan saw Genji's carelessness as a liability, but his father didn't mind. When their father died, Hanzo's first action as its new head was to convince Genji to take more responsibility in the clan. Genji refused, and a fight broke out between the two that left Genji injured, scarred, and on the verge of death. He was secretly rescued by Overwatch agents and nursed back to health by Dr. Angela Ziegler, a.k.a. Mercy.

Overwatch's doctors and scientists developed cutting-edge prosthetics for Genji that enhanced his natural speed, agility, and reflexes. As a member of Blackwatch division of Overwatch, Genji began to dismantle the Shimada Empire.[1] It seems that after the The King's Row Uprising Genji transferred to Overwatch and became one of the members of its new-strike team along with Tracer, Mercy, and Winston and participated in the capture of Akande Ogundimu a.k.a Doomfist in Singapore and the capture of Maximilien Talon's head financier in Havana, Cuba. As time went on, however, Genji felt repulsed by his mechanical half and left Overwatch when the Shimada Empire finally fell.

Genji had wandered around the world for many years, and spent an amount of time with the Bedouins, trying to come to peace with his cyborg body.[4] After drifting for many years, Genji met Zenyatta, a member of the Shambali that helped Genji to come to terms with his new existence. Genji moved into their monastery in Nepal with Zenyatta as his mentor.

At the time of the Overwatch recall, Genji had returned to Japan. Genji came to Hanamura on the day of his supposed "death" to confront Hanzo, who did not recognize him. The two fought, and Genji came out on top with the opportunity to kill Hanzo. He did not, instead revealing his identity, forgiving Hanzo, and giving him some words to ponder before vanishing, that the world was once again changing and it's time to choose a side.[5]

Sometime after his confrontation with his brother, Genji met up with Tracer, Mei, and Winston in Paris, saving the scientist from sacrificing himself to Null Sector so that the others could getaway. He used his sword to great effect in deflecting the giant omnic's cannon shots before slashing off its fingers to enable Tracer to plant her makeshift bomb that snap froze the titan. After the battle he is seen with the others when Winston announces Overwatch's return, seemingly agreeing to rejoin the organization.

Genji is a cyborg ninja. He wears a metallic helmet with a green line down the front and a gray ribbon in the back. His mechanical body mostly consists of white and silver armor.

In his former life, Genji is a young man with fair skin, spiky black hair, and gray eyes.

After being rescued by Overwatch and the intervention of Angela Ziegler, Genji is upgraded extensively by Overwatch’s cyberneticts. He receives his new body while also maintaining half of his normal body, such as face, half of his chest, and left arm.

In the past, Genji was a playboy that had been more content with enjoying life than running his family's criminal empire. After his near-death experience, Genji dedicated himself to demolishing his former consortium. However, he began to have an existential crisis and self-loathing regarding his cybernetic state after his mission. It was not until he encountered Zenyatta that he made peace with himself.

Genji is a faithful and tolerant idealist, forgiving Hanzo for leaving him on the verge of death and still having hope that he can change himself for the better. At times he shows wisdom, picking up some of the things that Zenyatta has taught him.

Despite his hardships, Genji maintains a sense of humor, jokingly calling himself "Green Cyborg Ninja Dude". He also seemed to enjoy arcade games and ramen before he became a cyborg, as shown by his dialogue at Hanamura. 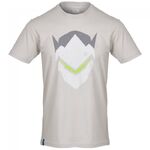 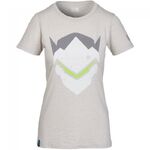 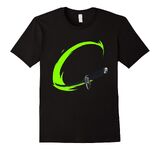 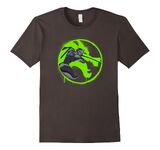 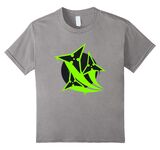 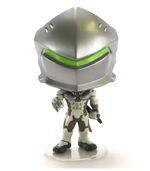 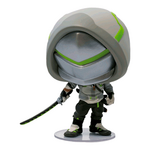 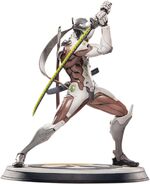 Retrieved from "https://overwatch.fandom.com/wiki/Genji?oldid=102751"
Community content is available under CC-BY-SA unless otherwise noted.