Zarya launches a gravity bomb that draws in enemy combatants and deals damage while they’re trapped. 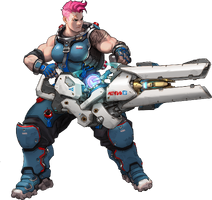 Zarya launches a bomb that becomes a black hole on impact, dealing damage and pulling in all enemies within range. Enemies trapped in the Graviton Surge can still use weapons and abilities, but cannot use movement abilities. The only heroes that can escape Graviton Surge are Moira (Using Fade), Reaper (Using Wraith Form), Orisa (Using Fortify), Mei (using Cryo-Freeze), and players resurrected by Mercy (During the invulnerability effect of Resurrect).

A Zarya on the enemy team and player-controlled Zarya will shout "Огонь по готовности!", while an allied Zarya shouts "Fire at will!"

Retrieved from "https://overwatch.fandom.com/wiki/Graviton_Surge?oldid=93436"
Community content is available under CC-BY-SA unless otherwise noted.