Soldier: 76's primary fire is a rapid fire hitscan. Each bullet can headshot and is subject to damage falloff. The Heavy Pulse Rifle gets less accurate the longer it is fired, for the spread will steadily get wider after 5 rapid shots, and will reach its maximum width after 9 shots. However its spread recovers rather quickly.

The viewmodel of the weapon has a visual counter of shots remaining before needing to reload, which can be found below the sights towards the rear of the gun. The counter will change color depending on the amount of shots left, glowing blue when at full capacity and turning orange when less than half of the ammo remains. This visual display can change with his other skins' weapon models. 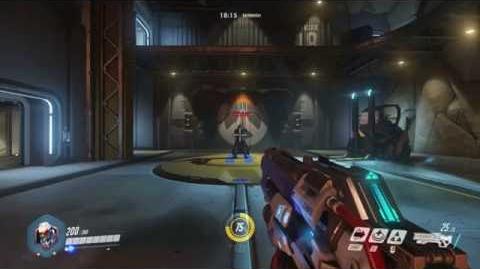 Retrieved from "https://overwatch.fandom.com/wiki/Heavy_Pulse_Rifle?oldid=97364"
Community content is available under CC-BY-SA unless otherwise noted.