This article is about playable characters. For the animated short, see Hero. 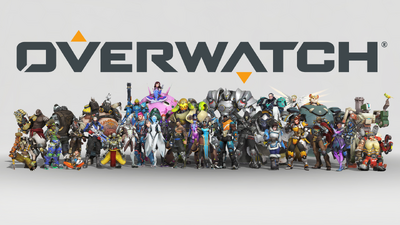 The hero roster, as of Overwatch's fourth anniversary

There are 32 playable heroes in Overwatch. Each hero offers a unique style of play, and is classified under one of three roles: Tank, Damage, or Support. Each team can only have 1 of each hero, although some Arcade game modes allow multiple. Players can switch heroes in the spawn room.

Heroes come from a variety of national/ethnic backgrounds, and occasionally speak in their native languages during matches.[1]

Heroes are controlled using a controller. Every hero has a unique weapon. Some heroes have multiple weapons, which can be switched using 1 and 2. Abilities are normally keyed to Shift, E, and Q (the ultimate ability). Heroes have 150 to 600 HP and move at a base speed of 5.5 m/s (except Genji and Tracer, whose base speed is 6 m/s). Walking backwards reduces this speed by 10%. Crouching makes their speed 3 m/s (in every direction). Also, all heroes can jump at a height of 0.98 m.

Heroes exchange specific dialogue with each other based on their character history during matches and background.[1]

Heroes will be added over time post-launch as free updates.[2] Jeff Kaplan has not ruled out removing heroes from the roster in the future.[3]

The idea of classes for heroes was to make it easier for new players to get into the game, and to easily understand how each character would play.[4] When the Looking for Group feature was added, it became possible to enforce these roles.

There were originally 21 heroes at the launch of the game. Since then, 11 additional heroes have been added. New heroes are released roughly every 4 months, typically in March, July, and November. The November reveal happens during the opening ceremony of BlizzCon.

When a hero is pitched, a group of five developers examine the concept from the perspectives of gameplay, character concept and story to see if the idea is worth fleshing out. If that's in the affirmative and the concept is settled, the team of five becomes a team of ten to fifteen, who are tasked with "finding the fun" in the hero and bringing out its "core." This includes work on art, design, engineering, audio and quality assurance. Once this is completed, the hero gains (or will have gained) forty or more developers, which build its respective content (skins, emotes, voice lines, etc.)

After the hero is fully playable, a different group is brought in to build the hero's story; by this point around eighty developers. These individuals work on material such as origin videos, comics and animated shorts. After that, the hero then needs to be publicized. By this last stage, over 150 individuals will have worked on the hero in some form.[8]

The following heroes have been cut during development of the game:

An early heroes pitch—some heroes are in the final version

The Overwatch development team added a dummy string very early on containing the name of a fake hero: Dying Breed. This was done to identify if the game's files were datamined and uploaded to the internet. They forgot to remove the string when the beta was shipped, and it created some confusion among the team members who discovered it for the first time.[12] The string has long since been removed.