Hit points (HP) represent how much damage a hero or object can take. The health bar shows the amount of HP, divided into bars each worth 25.

If a hero's HP becomes 35% or lower, a gasp sound effect is played and blood appears around the borders of the screen. The exception to this is 150 HP heroes who get it at 70 HP. 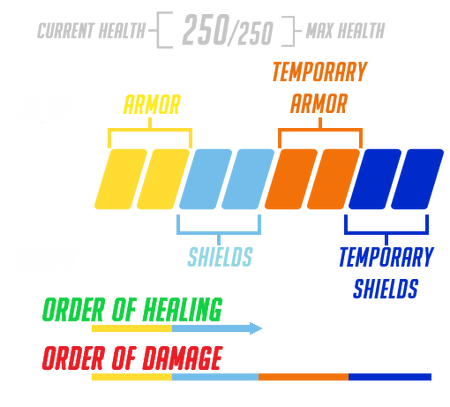 When being healed, the priority order is Health > Armor > Shields.

If there are shields above armor, and an instance of damage destroys the shields and damages the armor, armor will reduce that damage based on how much damage the armor would take. For example, suppose Wrecking Ball has 99 temporary shields from Adaptive Shield and he gets hit by Fire Strike (100 damage). The armor would take 1 damage, a number less than 10, so it reduces the damage by 0.5 instead of 5. Wrecking Ball takes 99.5 damage from the Fire Strike.

HP that can be healed. There are three types: health, armor, and shields.

The most basic form of HP is health. Health is depleted when there is no armor or shields to protect it, and is the first to be replenished when being healed.

If a hero's health comes to 0, they will die.

Some heroes have a type of HP called armor. For every instance of damage, armor reduces the damage by 5, but it cannot reduce it by more than 50%. In other words, armor halves any damage that is lower than 10, instead of taking away 5.

Some heroes have a type of HP called shields. Symmetra's Teleporter also has some shields.

Shields automatically regenerate at a rate of 30 shields per second after avoiding damage for 3 seconds. This is treated as a form of healing, meaning Biotic Grenade can amplify or block it.

Shields are destroyed by Sombra's EMP.

Barrier health is a type of shield health.[1][2]

HP that cannot be healed and are only temporary, generated by hero abilities.

Temporary health is currently unavailable outside of the Workshop, where it can be applied to a player with the Add Health Pool to Player action.

Non-recoverable shields, or temporary personal shields,[3][4][5][6] are susceptible to EMP like regular shields but do not regenerate and often decay by themselves.