Horizon Lunar Colony is an Assault map in Overwatch.

Built as a first step towards humanity's renewed exploration of space, the Horizon Lunar Colony’s goal was to examine the effects of prolonged extraterrestrial habitation—on human and ape alike. The scientists' research proved incredibly promising...until, suddenly, all contact and communications with the base were lost.

The Horizon Lunar Colony (otherwise designated "Horizon One")[1] is a moonbase constructed by Lucheng Interstellar,[2] operated by its Lunar Ops branch.[1] It was established as part of humanity's renewed focus on space exploration. In addition to the scientists that worked there were a group of genetically enhanced gorillas that were intended to test the effects of prolonged habitation in space.[3] Towards the colony's last days, some of the gorillas had demonstrated adverse reactions to the genetic therapy, possibly compounded by life on the colony itself. A group of gorillas had established themselves as well-known troublemakers to the staff, and had put even some staff in the base's infirmary. It was agreed that the gorillas should be confined to their quarters, but Dr. Harold Winston pointed out that not all of the gorillas had reacted adversely to the therapy. He didn't know if shipping them to Earth would be a viable solution, if only for the medical issues that would present themselves. He advised putting a stop to the therapy.[4]

The experiments came to an end when the gorillas launched an uprising, killing the scientists and claiming the base for their own.[3] It is known that in one of the last recorded messages, Dr Winston reported a malfunction at airlock E-35, and requested fellow staff members join him.[4] It has further been implied that this was a ploy by the gorillas, who got the scientists in the airlock and then opened it, venting the humans onto the lunar surface to die from asphyxiation.[5] For the gorillas themselves, it has been indicated that they are so far happy to stay within the base.[6] Specimen 28 was one of the only exceptions, who built a rocket out of makeshift parts and successfully made it to Earth.[3] Specimen 8 also escaped from the colony after engineering an escape pod and secretly attaching it to Specimen 28's space shuttle. [7]

Years after the base's fall, Lucheng Interstellar revealed in a press conference that the colony's databases and monitoring systems were still up and running. While no direct communication was established with the facility, the company successfully retrieved interpersonnel logs sent days and moments before the base lost contact with Earth. It shared the transmissions with the press. It later released its first image of the colony's still-operating integrated monitoring systems. A Lucheng spokesperson told Atlas News that the connection was unstable, but that the company was working around the clock to gather new information.[4]

The map has a Point A (the telescope) and a Point B on its attack route. The base may be exited via airlock doors. Outside the base, players will fight in low gravity.

The layout of the colony

With the exception of Dr. Chao, all members of staff were killed by the gorillas. 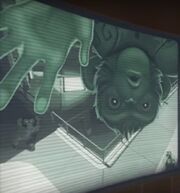 Two of the base's test subjects

At least some, if not all of the gorillas were named after the human staff.[4] 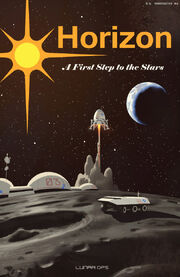 An advertisement for Horizon

The idea of a moon map was present from the earliest days of the game's development. It kept being pushed back, as the developers wanted to do the idea justice in both story, and how low gravity would be handled.[8] The map was created in order to introduce a new Assault map to the game. Initially, all of the map took place in low gravity. However, it felt gimmicky, and it broke the game in some ways, at least as far as competitive balance went.[9]