Junkrat is one of the heroes in Overwatch. He is a demolitionist and an international criminal who is being targeted by law-keepers, bounty hunters and other criminals world-wide for the treasure in his possession.

Junkrat’s area-denying traps include a custom designed Frag Launcher that lobs bouncing grenades, Concussion Mines that send enemies flying, and Steel Traps that stop foes dead in their tracks and make them vulnerable to other attacks.

Junkrat is an explosives-obsessed freak who lives to cause chaos and destruction.

The attack on the Australian omnium's fusion core forever altered the landscape of the Outback. After the detonation, the area was transformed into a harsh, irradiated wasteland, littered with debris and the twisted fragments of the ruined facility, and unlivable to most.

But there were some who survived. Calling themselves the Junkers, they scavenged the husk of the omnium and formed a lawless, cutthroat society in its shadow. Junkrat was one of them, eking out a living reclaiming metal and components from the ruins. Like many others, he was affected by the lingering radiation. This touch of madness made him ideal for handling dangerous explosives, a love which he turned into an obsession.

He came to notoriety when he discovered an extremely valuable secret in the bones of the omnium. Though few knew the nature of what he found, he was nonetheless pursued by bounty hunters, gangs, and opportunists wherever he went, until he made a deal with the Junker enforcer Roadhog, who grudgingly agreed to be his personal bodyguard in exchange for a fifty-fifty share of the spoils.

Now, with Roadhog in tow, Junkrat has left the Outback, and embarked upon an international crime spree leaving nothing but havoc and bedlam in his wake.

Concussion Mine
Arcing splash projectile type
2 charges
60 - 120 damage
3 m splash radius
5 HP
20 m/s projectile speed
Lasts until detonated
8-second cooldown
✘ Cannot headshot
✘ Cannot inflict self damage
✔ Can inflict self knockback
After placing one of his homemade Concussion Mines, Junkrat can trigger it to damage enemies and send them flying... or propel himself through the air.
Default Key: (

Junkrat revs up a motorized tire bomb and sends it rolling across the battlefield, climbing over walls and obstacles. He can remotely detonate the RIP-Tire to deal serious damage to enemies caught within the blast, or just wait for it to explode on its own.

Besides these abilities, Junkrat is able to jump, crouch, reload (only when his ammo is not full), and perform Quick Melee.

For all of Junkrat's skins and weapons, see Junkrat/Skins and Weapons.

One purchase of an alternate weapon skin will apply to the Frag Launcher and Concussion Mine Detonator of all unlocked skins when equipping it.

Knock an enemy into your Steel Trap using Junkrat's Concussion Mine in quick or competitive play.
Reward: Pixel Spray

Kill 4 enemies with a single use of Junkrat's RIP-Tire in quick or competitive play.
Reward: Cute Spray

Jamison Fawkes was a Junker from the Junkertown who collected bits of metal and scrap for a living. The job combined with the effects of the lingering radiation gave him a deranged love of explosives.

In the remains of the ruined Omnium, Jamison found a large and incredibly valuable treasure, and he became the target of bounty hunters and gangs. He hired the Junker enforcer Roadhog as a personal bodyguard in exchange for half of his profits. Together, the two went on a crime spree around the world. Junkrat and Roadhog have stolen royal artifacts from King's Row, destroyed shops and trucks in Paris, robbed the arcade in Hanamura, and stolen most of the Bank of Dorado's gold in their crime spree.

At some point, Junkrat and Roadhog made a deal with the CEO of Hyde Global in Sydney to rescue its workers from omnic terrorists, as Junkrat wanted to become "legit". They found out that the "terrorists" were actually Hyde Global drones, and that the CEO had set them up, so they hung him from the top story of his skyscraper before blowing it up.[1]

Junkrat was later involved in another escapade with Roadhog in Luna Park, Australia.[2]

In Junkertown: The Plan, Junkrat and Roadhog were kicked out of Junkertown by its Queen. Junkrat attempted to come up with a plan that would allow the two into the town once more (one involving explosives, of course). Unfortunately, his efforts evidently proved futile, and Junkrat remained exiled.

Junkrat is a dirty caucasian male of a slender build who is often seen hunched over. he has dirty blond hair which is always sort of on fire, a chest harness which has his homemade grenades on them, he doesn't have a shirt on like most male junkers, a tattoo of a skull and cross bones on his right arm, on his left arm he wears a yellow bracelet and a green fingerless glove, his right arm and hand are gone, having a orange prosthetic, he wears green torn shorts with some patches on them (one of which is his logo), he has a brown boot on his left leg, while his right being a pegleg, being insane and unstable he is useally seen with a big grin

Junkrat is established to be a chaos-inducing maniac with a passion for destruction. Lawless and volatile even by Junkertown standards, Junkrat has a simple outlook: any problem that can't be solved by money or explosives isn't worth solving. His impulsive, trigger-happy nature results in a frequent failure to think things through coupled with a tendency to jump the gun. Like many from Australia, he abhors omnics.

It has also been established that Junkrat is not a particularly clever man - he hates being tricked or taken advantage of, but is willing to do any job that allows him to thoughtlessly blow things up. He also appears to be somewhat clumsy, as shown in his "Unfortunate" Highlight Intro, where he accidentally hits himself in the groin with a bomb.

Despite his criminal ways, Junkrat does have some positive virtues. He seems to care about his friends, an example of this being his expressive rage towards a police officer for calling Roadhog fat in Going Legit. He often makes brash puns related to fire and explosions and even has some friendly voicelines as well, such as "smile" and "have a nice day" - though these may be said with a psychotic edge. As seen in Going Legit Junkrat is willing to do honest work and was genuinely excited to improve his reputation, though this ended up backfiring on him. 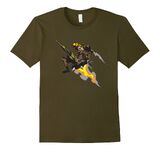 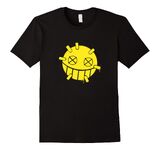 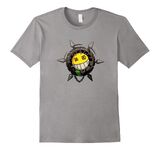 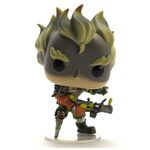 Retrieved from "https://overwatch.fandom.com/wiki/Junkrat?oldid=102414"
Community content is available under CC-BY-SA unless otherwise noted.