Maximilien is a wealthy omnic and a member of Talon's inner council. He runs the Casino Monaco.[2]

Maximilien started as an accountant, but found his true talent in money laundering. Over the years, he found wealth in the businesses he purchased and ran, such as Don Rumbotico, Casino Monaco, and other businesses around the world.[3]

Maximilien was known to Blackwatch at least eight years prior to the Overwatch Recall.[4] After the death of Antonio (of whom he was an associate), Maximilien was among those who stepped up to fill the void he'd left.[2] Within the next two years, he exerted more "muscle" within Talon. Sojourn speculated that this was due to Doomfist's arrival within Talon.[3]

Six years before the Recall, Overwatch struggled to arrest Doomfist. Overwatch agent Sojourn recommended that they instead capture Doomfist by targeting Maximilien, and she sends a strike team of Tracer, Mercy, Winston, and Genji to arrest him.[5] Maximilien was believed by Overwatch to be "soft" and more likely to give information to Overwatch than other members of Talon.[6] He escaped initial capture and fled through the Don Rumbotico distillery to the Havana Sea Fort, but he was captured before he could board a helicopter out of the city. Immediately, he offered to make a deal with the strike team and ultimately agreed to arrange "an introduction" with Doomfist.[7] He told Overwatch that Doomfist would be in Singapore in three weeks, leading to Doomfist's arrest, and in exchange requested that Overwatch not tell Doomfist of his betrayal.[8]

Maximilien met with Doomfist and Widowmaker at a casino in Monaco shortly after Doomfist's prison break. There he apprised Doomfist of goings-on within Talon, reaffirming his loyalty to Doomfist's cause and warning him that some within the organization would have preferred to see him remain behind bars. After defeating a group of hitmen sent by Vialli, a rival Talon council member, Doomfist asked Maximilien to clean up the mess and departed.

Maximilien later met with Doomfist, Reaper, and other members of the inner council in a hidden boardroom at a masquerade ball in Venice, Italy, where Doomfist discussed his plans to start a new war.[9] 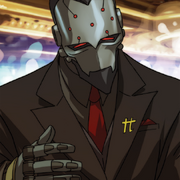