Mei is one of the heroes in Overwatch. She is a climatologist who is on her own adventure to preserve the environment and ecosystem after waking up from a decade-long cryostasis sleep.

Mei’s weather-altering devices slow opponents and protect locations. Her Endothermic Blaster unleashes damaging icicles and frost streams, and she can Cryo-Freeze herself to guard against counterattacks or obstruct the opposing team's movements with an Ice Wall.

Mei is a scientist who has taken the fight to preserve the environment into her own hands.

Though many blamed the planet's escalating, unexplained climate phenomena on the advent of new technologies, the rapidly growing omnic population, and drastically increased consumption of resources, the true cause remained unknown. To find a solution, Overwatch established a series of eco-Watchpoints at remote, critical locations worldwide.

Mei-Ling Zhou was a member of this multiyear initiative. A peerless climatologist, she had introduced cutting-edge innovations in the field of climate manipulation that protected at-risk areas in Asia and beyond. She was assigned to the program's monitoring station at Watchpoint: Antarctica when disaster struck: a sudden, catastrophic polar storm battered the installation and cut it off from the outside world, leaving the facility damaged and the scientists stranded. As their supplies dwindled, they entered cryostasis in a last-ditch effort to survive until a rescue attempt could be made.

But that rescue never came. It was years later when the team's cryogenics chamber was finally discovered. Mei, still in hibernation, was the only survivor. The world Mei awoke to had gone through considerable changes: Overwatch was no more, the serious climate issues had worsened, and none of the eco-Watchpoints were in operation. Any clues that they had uncovered were lost.

Mei has decided to continue her work on her own. Equipped with a portable version of her climate-manipulation technology, she travels around the world, hoping to re-establish the eco-network and track down the causes of the threats to the planet's ecosystem.

Cryo-Freeze
Self healing type
+15 rounds per clip
37.5 HP per second on self
Caster is immobilized
Lasts 4 seconds or until cancelled
12-second cooldown
Mei instantly surrounds herself with a block of thick ice. She heals and ignores damage while encased, but cannot move or use abilities.
Default Key: (

Mei deploys a weather-modification drone that emits gusts of wind and snow in a wide area. Enemies caught in the blizzard are slowed and take damage; those who linger too long are frozen solid.

Besides these abilities, Mei is able to jump, crouch, reload (only when her ammo is not full), and perform Quick Melee.

For all of Mei's skins and weapons, see Mei/Skins and Weapons.

Note:
b When equipping the skin Mei-rry, Mei will say "You have to let it snow" instead.

One purchase of an alternate weapon skin will apply to the Endothermic Blaster of all unlocked skins when equipping it.

Block 1200 Damage with a single use of Mei's Ice Wall in quick or competitive play.
Reward: Pixel Spray

Freeze 4 enemies at once with Mei in quick or competitive play.
Reward: Cute Spray

Mei-Ling Zhou was an innovative member of Overwatch's ecological studies whose technology was used around Asia for climate preservation. She was assigned to work with other scientists at Ecopoint: Antarctica when a polar storm cut off their communications and left them stranded. They entered cryostasis to survive until a rescue mission was made.

After approximately nine years had passed, Mei awoke from her cryostasis. Subsequently awakening Snowball, her assistant drone, from its inactivity and preparing for the day, Mei checked on the atmospheric fluctuations above the anomaly only to find out that they had been much worse than her team had predicted. Anxious about the sudden appearing data, she asked Snowball about long they had been dormant only to discover terrible news thereafter: Not only had Overwatch shut down, but all of her team had expired during their nine-year stasis, leaving Mei as the only survivor. As Mei cried for hours over the death of her friends, she came to the slow realization that their newfound data could save millions of lives, and promised that she will show her work to the world by any means necessary.

Following many failed attempts to leave the ecopoint, Mei became aware that their base had been broadcasting on the Overwatch emergency frequency and began the process of building the Endothermic Blaster, which could aid her in getting up to the radio tower. Unfortunately, when her creation was almost finished, the power had gone out, leaving the last battery dead. The power eventually came back on, but it came at the cost of Snowball's battery life, leaving Mei in a saddened state once again. When the blaster was completed, Mei returned outside and used its ice to her advantage on her dangerous climb to the top of the tower. Once she reached the summit, she gained a signal and received an announcement from Winston on recreating Overwatch. Eager to get the organization back together, Mei set out to rejoin civilization, but not before recharging Snowball with a solar-powered device and leaving warm cups of cocoa on the cryostasis pods.

Mei appeared to have met Winston before her decade-long trip to Ecopoint: Antarctica. Winston also recommended that Mei keep a journal of her travels. After the rescue, Mei had traveled to remote regions around the world, investigating Overwatch's abandoned Eco-watchpoints.[2] On her trip, she went to Mount Logan, Canada to test her technology, took a quick stop in Los Angeles on Halloween, then went to Nepal for an unknown project.[3] At some point, Mei saved a nest of endangered arctic wildlife from a collapsing glacier.[4]

At some unknown point Mei joined both Winston and Tracer in the newly reformed Overwatch's first public mission in Paris, France to deal with Null Sector who was invading the city, She expressed concern however about their chances, do to the fact she and Lena were the only agents so far to answer the recall leaving them with a three-person strike-team. After joining the battle the team was doing well until they encountered a giant omnic who destroyed their dropship and ruptured a gas line causing an explosion. While Mei was able to put up an ice wall to protect two French police officers and a little girl from the explosion, the shock wave flung here backward into a car injuring her shoulder.

With the odds against them, Winston ordered Tracer to take Mei to safety while he held off Null Sector. Despite Mei's protests that they were supposed stick together, the scientist promised to join them soon. Luckily, Winston was saved by the timely intervention of Genji before Reinhardt, Brigitte, Echo and Mercy, who provided healing for Mei, joined the fight. Mei soon combined her backpack with Tracer's pulse bomb as an improvised cryo bomb that snap froze and destroyed the giant omnic. In the aftermath, Tracer introduced Mei to her colleagues; Reinhardt made an ice pun while shaking hands with her, to Brigitte's annoyance.

Mei is very kind-hearted and positive, showing compassion for others and having a desire to preserve Earth's ecosystem for generations to come. As a scientist, she is willing to learn new things and is even inspired by Tracer as well as Winston. She also hates bullies, as shown by one of her quotes and an interaction with Junkrat.

At times, Mei appears to be slightly bashful. She is also very apologetic, often saying "Sorry!" when defeating enemies.

Mei is also shown not to have a fear of heights, as seen in Rise and Shine while she was climbing the tower with her endothermic blaster. 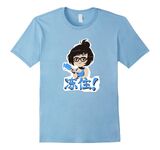 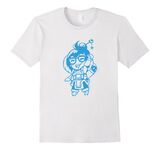 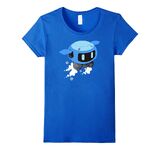 Retrieved from "https://overwatch.fandom.com/wiki/Mei?oldid=102718"
Community content is available under CC-BY-SA unless otherwise noted.