Tekhartha Mondatta was an omnic and leader of the Shambali.

Years ago, a group of omnic robots experienced what they described as a spiritual awakening. They abandoned their pre-programmed lives to establish a monastery high in the Himalayas, where like-minded omnics could gather to meditate on the nature of their existence. Mondatta was their leader, and they took over the ruins of an ancient monastery, turning it into the home of the Shambali. Here, humans and omnics could make pilgrimages in the hopes of finding a greater truth.[2]

Mondatta preached the idea of spiritual equality existing between omnics and humans. He led the Shambali in order to heal the wounds between omnics and their creators in the wake of the Omnic Crisis.[3] Mondatta did much to try and improve the conditions of the omnics within King's Row.[4] 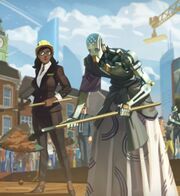 Mondatta at the groundbreaking ceremony

Seven years before the present day, Mondatta was at the groundbreaking ceremony of Turing Green SW0. The event was interrupted by the omnic terrorist group Null Sector,[5] They took Mayor Nandah, Mondatta, and a hundred other prisoners captive in a guarded power plant. 28 days later, Overwatch sent in a strike team to neutralize Null Sector and rescue the hostages.[6] Mondatta survived, but the events that transpired were classified within Overwatch's archives.[7]

Mondatta after being shot

Seven years after the Uprising, Mondatta was again in King's Row. Under tight security, he addressed a joint human-omnic crowd. However, he was assassinated by Talon operative Widowmaker, despite Tracer's efforts to stop her.[8] In his memory, a large statue was built at King's Row, and a memorial picture was placed on the stairs in front of The Meridian, where he gave his final speech.[9] Talon's involvement remained unknown within the press.[10] In the aftermath of his death, brawls between humans and omnics erupted throughout the world.[11]