Null Sector is an extremist/terrorist group that utilized violent methods to achieve omnic rights. They operated out of the United Kingdom, in the heart of London.[1] Their implied goal was to create an omnic nation.[2] 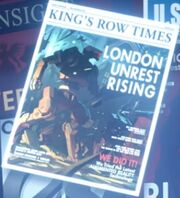 Null Sector was formed as a consequence of the United Kingdom's harsh treatment toward its omnic population. Much of modern Britain was built on the backs of omnic laborers, who did dangerous and menial work, but were denied basic rights and citizenship. Omnics were forced to undergo mandatory registration, and were treated as if under military occupation; marched throughout the streets by armed soldiers, and forced to be scanned at omnic transit checkpoints. As a result, Null Sector enjoyed some support among Britain's omnic population.

Null Sector fought from the underground, and was willing to do "whatever it took" to achieve omnic equality. Null Sector gradually took over more control of London. Some accused them of being a terrorist organization.[3]

Seven years before the present day,[1] after stirring unrest in London,[3] Null Sector launched the King's Row Uprising. The uprising saw London in flames. On the 27th day of the Uprising, the prime minister of the UK expressively forbade Overwatch from interfering. By this point, Null Sector had taken Mayor Nandah, Mondatta, and a hundred other prisoners captive in a guarded power plant. Thousands in King's Row needed medical aid. Blackwatch agent McCree reported the hostage situation to Strike Commander Jack Morrison. After much deliberation, Morrison authorized an illegal Overwatch mission to end the crisis.[1]

By the 28th day of the Uprising, Null Sector's actions had taken hundreds of lives, led to thousands of injuries, and had, in the mind of Morrison, taken the UK, if not the world, to the brink of open war. Four Overwatch agents—Tracer, Reinhardt, Mercy, and Torbjörn—touched down in King's Row, and fought their way through the hordes of Null Sector omnics that came at them.[2]

Null Sector made a return to the world stage by launching an attack on Paris; one that the French police were hard pressed to stop. An Overwatch team consisting of Tracer, Mei and Winston arrived to help with the evacuation, but were not only heavily outnumbered by Null Sector's Nullifiers, but with the arrival of a Titan, heavily outgunned as well. However, the tide was turned with the arrival of additional Overwatch members, who were able to fend off Null Sector and destroy the Titan.[4]

Despite their defeat in Paris, Null Sector was able to launch a global invasion, striking at numerous targets across the planet.[5] The world's militaries were quickly overwhelmed.[6]

Null Sector launched an attack on Rio de Janeiro. A command ship hovered above the city, dispatching Null Sector forces to the ground via pod. Lúcio did what he could to stem the tide, and was aided by a newly arrived Overwatch team. They fought their way through Rio's streets in order to get to the command ship.[5] The command ship was destroyed.[7]

Null Sector were present at Route 66. They were engaged by Winston and Mercy.[5]

Null Sector employed a variety of different kinds of omnics in their assault on King's Row. Among those seen were:

7 years after the siege on King's Row, Null Sector had waged war across the entire world. The variety of omnics they used there were more advanced and diverse than those from their previous attack. Among those seen are: