For the graphic novel of the same name, see Overwatch: The Omnic Crisis

The Omnic Crisis was a rebellion by the omnics against their human creators,[1] decades before the present day.[2] It has since been referred to as "one of the greatest threats to the survival of our species since the Cold War of the 20th century."[3] It was considered a world war.[4]

The Omnics launch their attack

In the modern day, some believe that the origins of the Omnic Crisis lie in unchecked desire for scientific advancement.[5] But more specifically, the war's origins lie with the Omnica Corporation, and the omniums they had created.[6] The omniums and their robot populations had been created to bolster manufacturing and create economic equality worldwide.[7] However, when Omnica was shut down after evidence of fraud, the omniums were shut down. It therefore came as such a surprise when these defunct, dismantled omniums woke themselves back up and immediately launched a military campaign against all of humanity,[6] churning out legions of militarized robots.[3] The omnics also hijacked pre-existing technology such as the Titan walker, and converted it into a weapon of war.[8] The world reeled at the appearance of this new enemy, as the omnics waged a war to overthrow the human race.[3]

Course of the War[edit | edit source]

The nations of the world sent their armed forces against the omnics, and utilized their own technologies to combat the threat.[9] This was a war many countries thought they were prepared to fight. But no single country, no matter how powerful its military, could permanently shut down a single omnium. The adaptability of robots, once celebrated by humanity, had become a tactical nightmare. Worst of all, there were no demands from the omnics. There was no ideological reason for their aggression. They simply attacked, and no-one could understand why. No country was able to secure its own territory[6] and the omnics were able to take over the world.[9] Russia was an exception in that it was able to defeat the omnics by itself.[22] The German military did achieve a victory of its own at Eichenwalde, though at the cost of all the Crusaders present at the battle.[16]

But some soldiers and strategists showed remarkable ingenuity in acclimating to this new brand of warfare. The United Nations covertly brought a few of these unique minds together to form a small, nimble team, aimed at striking significant blows against omnic strongholds.[6] Named Overwatch, this was an international taskforce;[23] that would wage asymmetrical warfare against the omnics.[3] In highly secretive missions, they targeted the omnics' command and control protocols. After great sacrifice and heroism in a series of dangerous raids, they destroyed it all,[6] taking out the force behind the uprising,[9] rendering the omnic armies inert. The Omnic Crisis had finally come to an end.[6] 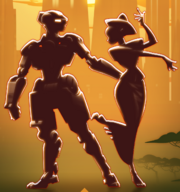 Humanity struck peace with the surviving omnics,[4] and peace accords were signed.[24] The Bastion combat units that had served the omnics were rounded up and destroyed bar one.[21] Casualty figures for humanity were somewhere in the tens of millions,[25] and by the war's end, 30 million children had been left orphaned. Numerous groups, including mercenary organizations, were left poised to profit from the war's aftermath.[13]

A generation has passed since the end of the war.[1] The conflict had the effect of changing the world landscape,[9] and a financial crisis was experienced in the war's aftermath.[26] But even now, tensions between omnics and humans remain because of the conflict.[1] Australia was one such example, as the country's omnics were given land within the Outback that led to the creation of the Australian Liberation Front, sparking civil unrest that led to the omnium's destruction, and consequently, irradiation of the country's center.[18] The people of Mexico refer to the conflict as "la Medianoche" (lit. "The Midnight")[17] and the city of Dorado holds a regular celebration that commemorates the end of the conflict.[27] While heavily affected by the war, in its aftermath, Russia experienced a period of rapid growth as its mechanized labor industry was revitalized.[28]

In the present day, tensions between humans and omnics have never been higher, particularly after the assassination of the omnic spiritual leader Tekhartha Mondatta.[6] Nowhere are tensions higher than in King's Row.[27] Russia is currently in the midst of a second crisis.[29]

Numbani, however, is an exception to these tensions, which was founded by Gabrielle Adawe in a bid to abet the peace process between humans and omnics.[30] Here, they live together in peace.[31]