Overwatch 2 is the next iteration of Overwatch.

Overwatch 2 will have an ongoing plot, focused on a second omnic uprising. It will explore who is behind it. The plot takes place over the whole world.[3]

Overwatch 2 will feature PvE story missions that are set after Overwatch was recalled by Winston. In these PvE missions, players can upgrade and customize abilities. Furthermore, PvE missions will also include items of various rarities that players can pick up and use to perform different effects (e.g. heal, damage, create a barrier, etc.). The PvE maps will be larger than those featured in the original game.[5]

Elite units have been added to PvE scenarios. Here, enemy units are altered to give them distinct properties that set them apart from their base forms.

The game introduces a Talents system.[3]

Work on Overwatch 2 (in some form) began as soon as the original game shipped. The developers are considering cross-play between the PC and console versions.[6]

The existence of a second Overwatch game was hinted at by J. Allen Brack in May 2019.[7]

In a June 2019 Kotaku article, it was confirmed that Blizzard staff were being transferred from Ares to work on other projects. Among the rumoured projects they were sent to was a PvE focused Overwatch game that has been likened to Left 4 Dead.[8] While the game was expected to be revealed at BlizzCon 2019, a French employee had reported that they felt the game would not be released before 2020.[9]

In October 2019, ESPN had received information and a package regarding the information that was to be revealed at BlizzCon 2019. Among the package was information about Overwatch 2 being revealed, alongside a new gamemode Push and a new map Toronto. Hero talents and in-game items are also expected to be included in the game, but it is unknown whether they will be for the proposed PvE modes exclusively.[10] Their report was later updated, stating that it was likely the game would be called "Overwatch: Chapter 2," as opposed to "Overwatch 2."[11] A few days later, artwork of the game was leaked, showing heroes of the original game featuring redesigns.[12]

The game was revealed on 1 November at BlizzCon 2019.

In late 2020, the size of the game's development team was expanded.[13] The game passed a "significant development milestone in December 2020. By this point, the game had hundreds of developers working on it.[14] 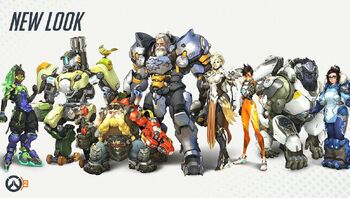 The game's heroes have undergone an artistic redesign. The redesign varies from hero to hero, but each seeks to be true to the hero's core story, and to imply where the heroes have travelled, or who they've spent time with between games. Evolutions to the game’s technology, like new shaders and lighting, have allowed greater detail in character rendition, which translates to more emotion via facial features and body language. To further improve the feel of the world, the art team explored ways to push the technology and bring environments to life using weather systems, fog changes, improved cloth, more particles, and sequenced events. Dynamic weather effects, first introduced in Storm Rising, has been improved.[15]

The game's weapons have been given a sound and graphics overhaul. New software was used for the system, and sounds from real-life firearms was collected. The game's firearms will sound different depending on the environment they're fired in (e.g. firing a weapon outside won't have the same effect as firing a weapon inside). A "camera shake" effect is employed when firing weapons, simulating recoil.[3]

The developers intend for the game to have a cinematic feel to it, taking inspiration from the cinematics that were released sporadically during the time period of the first game. The game's plot was storyboarded, where developers would conceptualize cutscenes via whiteboards on a daily basis. Later, the storyboards were sent to the writers' room to refine the plot.[3]