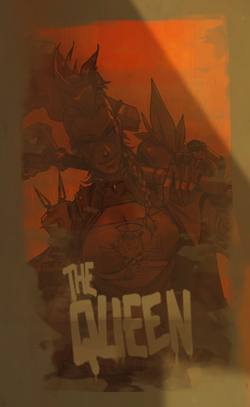 The Queen of Junkertown is the ruler of the Junkers and former champion of the gladiatorial mech battles. She rules from her throne in the Scrapyard and has a personal PA system set up in Junkertown.

In Junkertown: The Plan, Junkrat and Roadhog plan to kill her with explosives as revenge for exiling them from the city. Because they can't get into the city, they are unsuccessful.

Posters of the Queen can be found throughout Junkertown.

The Queen of Junkertown crowning Wrecking Ball Champion of the Scrapyard
Retrieved from "https://overwatch.fandom.com/wiki/Queen_of_Junkertown?oldid=94015"
Community content is available under CC-BY-SA unless otherwise noted.