Roadhog is a Tank hero in Overwatch.

Roadhog uses his signature Chain Hook to pull his enemies close before shredding them with blasts from his Scrap Gun. He’s hardy enough to withstand tremendous damage, and can recover his health with a short breather.

Shotgun (hitscan)
After cramming a top-loader onto his Scrap Gun, Roadhog pours in ammo. For a short time, he can crank out a stream of shrapnel that knocks back enemies.
Damage:
7 per pellet, 4928 overall
Move. speed:
-25% penalty
Rate of fire:
128 pellets per second
Casting time:
0.5 seconds
Duration:
5.5 seconds
Headshot:
✓
Ultimate cost:
2240 points
Damage and knock back enemies in front of you.
Details:
Example Video

Roadhog has a unique Tank playstyle that's focused on singling out vulnerable enemies and yanking them in for the slaughter with his Chain Hook. His Scrap Gun gives him powerful short to medium-range damage, while Take A Breather allows him to remain a persistent threat, even without a friendly Support. However, his lack of any kind of barrier makes him a lackluster pick when your focus is on protecting your teammates. He can function as a flanker, where his chain can catch enemies unawares and kill them before they can react. With his large heal on a medium cooldown, he can operate for long periods of time away from his team. However, if you can alert your team when you hook an opponent they will be likely to shoot at the target, all but guaranteeing their demise.

7'3" (221 cm) tall, and 550 lbs (250 kg),[1] Roadhog is a ruthless killer with a well-earned reputation for cruelty and wanton destruction.[2] He remains silent most of the time.[3] He wears a mask with "hogdrogen" inhalers, which contain a pressurized chemical mixture that helps counteract the effects of radiation exposure.[4] 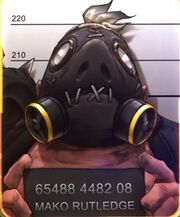 After the Omnic Crisis, government officials gifted the Australian omnium and the surrounding area to the omnics that had nearly destroyed their country, hoping to establish a long-term peace accord. This arrangement permanently displaced Mako Rutledge and a large number of the Outback's residents, a scattered collection of survivalists, solar farmers, and people who just wanted to be left alone.

Furious over the loss of their homes, Mako and others turned to violent rebellion. They formed the Australian Liberation Front and struck against the omnium and its robot population to take back the lands that had been stolen. Events continued to escalate until the rebels sabotaged the omnium's fusion core, resulting in an explosion that destroyed the facility, irradiated the region, and littered the Outback with twisted metal and wreckage for kilometers around.

Mako watched as his home became an apocalyptic wasteland, and he was forever changed.

Adapting to his environment, he donned a mask and took to the broken highways of the Outback on his ramshackle chopper. Little by little, his humanity was forgotten. The last vestiges of Mako faded away and the ruthless killer Roadhog was born.[2]

Waking up the Hog

Roadhog continued to dwell in his farm, which was located on the outskirts of Junkertown.[5]

At some point after making himself an enemy of the Queen of Junkertown (though he was still allowed inside the settlement as long as he took no weapons in) Roadhog found some Junkers attempting to loot his farm. He hooked one of them, but the Junker told him he was sorry and Roadhog could take all of their scrap and weapons in exchange for their lives. Roadhog accepted, stating (inwardly) that the world deserved them, and that they could scrap every panel around and it still wouldn't get them a mile to a real city.

He headed to Junkertown and (after some thinking on how he hated it there and how the Queen and the Junkers deserve what they get) went to a Junker named Bruce. He gave Bruce the scrap and weapons from the looters in exchange for some hogdrogen canisters. Bruce also told Roadhog "The world wants to forget blokes like us, Mako. Wants us to stay quiet. Don't give 'em the satisfaction."

Afterwards he headed to the bar and silently bought a beer with the leftover coins from the looters. While there, he overheard some Junkers confronting Junkrat about what treasure he'd found and also overheard him say he'd offer a friend he could trust a ten percent share. Junkrat pointed at Roadhog as he said the words. Roadhog ignored this at first while some Junkers told him to stay out of it. Junkrat offered higher percentage shares while an unnamed Junker told Roadhog to sit where he was. Roadhog then incapacitated the Junkers threatening Junkrat.

Roadhog demanded fifty percent of Junkrat's treasure, and after some haggling, Junkrat relented. He thought about Junkrat as the two walked away: "This idiot. He's a liar. Lies to himself most of all. But he's not the quiet type. The world deserves him. Deserves both of us. And we'll make sure they don't forget it."[6]

Roadhog grudgingly agreed to be Junkrat's bodyguard in exchange for a 50/50 share of the spoils.[7]

For some reason, Junkrat and Roadhog were kicked out of Junkertown, following a string of incidents that included stealing the Queen of Junkertown's money, blowing up her summer shack, and a bar brawl (possibly the one where they first met). Whatever the reason, Junkrat blamed Roadhog for it. Still, as Junkrat was well aware, there were two things that solved every problem—money, and explosives. That gave him an idea...[8]

The pair left the Outback, and embarked upon an international crime spree leaving nothing but havoc and bedlam in their wake.[7] They were responsible for a string of robberies, arson,[9] murder,[1] and other crimes stretching from Sydney to King's Row.[9] They had a creed of "no job too big, no score too small."[1] It is known that they performed a heist of the Banco de Dorado[10] by digging a tunnel. While in the United Kingdom, they stole the crown jewels.[11] Their spree of mayhem and chaos caused untold millions in property damage around the world.[1]

British, French, and Latin American authorities offered rewards for information on the fugitives, and theorized that they were intent on crossing the Atlantic to North America.[9] Their activities were reported on by A Moment in Crime, by which point the bounty on their heads had reached $25 million.[1]

The Junkers face off against the cop bots

At some point during their escapades, Roadhog and Junkrat were offered a job by a "Suit" from Hyde Global. The Suit claimed that a factory of his in downtown Sydney had been attacked by omnic terrorists, with his workers taken hostage. The Suit told the pair that he wanted to keep the police out of it, and that there "was no-one better" at keeping things quiet than the duo. The pair accepted the job, and made their way to the factory. Their 'quiet' approach consisted of detonating explosives on the roof and entering the factory in force. They blasted their way through the factory's robots, exited, and brought the whole structure down. As Roadhog reminded Junkrat, there were meant to be hostages, except there were none. And the robots they'd destroyed weren't omnics, but cop bots. At this point the actual police arrived, but the two made their escape. Upon realizing they'd been set up, the pair headed back to see their corporate friend. They strung him up on a crane and headed off, leaving the suit to die in an explosion that consumed the entire Hyde Global building.[3]

Their worldwide heist complete, Junkrat and Roadhog returned to Junkertown, with a hover-trolley loaded with gold and explosives. At the town gates, Junkrat laid out his plan—light the fuse, put on 'inconspicuous disguises', sneak into town, get the trolley to the queen's throne, reveal their deception, and kaboom! Roadhog had Junkrat refine the plan so that it included them escaping the detonation, and escaping with the gold at that. The plan was set in motion, only to be screwed up as Junkrat revealed their identities to the gate warden. The gates were barred shut, leaving the pair with a trolley of gold, useless disguises, and a ticking fuse. Breaking his long silence, Roadhog uttered a single word... 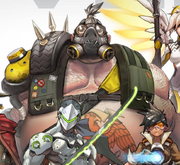 Developer Comment: When combined with the changes to shotgun patterns, we’re looking to keep Roadhog’s Chain Hook combo reliable, but not overly powerful against heroes with higher health pools.

Developer Comment: These weapon changes are intended to make Roadhog's Chain Hook combo more consistent and bring back some of the heavyweight feeling it had in the past.

Developer Comment: Roadhog is one of the best heroes at breaking down barriers quickly, but often he would be out of ammo and unable to capitalize on a barrier being destroyed. This change gives him more opportunities to poke at these high health targets and still having extra shots to threaten the enemy.

Developer Comment: Roadhog is receiving several large changes to make his abilities more consistent. His Chain Hook had issues with breaking when enemy targets jumped or fell behind environment collision. It will now slow them down in the air more when the hook lands, and wait less time before it starts reeling them in. Since Chain Hook’s cooldown now begins immediately upon use, it no longer varies based on Roadhog’s distance to the hook target. We’ve also moved some of the projectiles closer to the center of the spread pattern on his Scrap Gun, which gives him a more consistent damage output for its primary and alternate fire. Previously, there was a long-standing bug that caused close-range targets to fly much further than expected. After this bug was fixed, we still wanted to keep some of the knockback burst it provided, so we’ve increased the overall velocity cap to maintain some of that functionality.

Developer Comment: Previously, Roadhog’s Scrap Gun alternate fire didn’t have damage falloff which sometimes made it too powerful against far away targets. To balance out a slight power decrease, especially against barriers, we decided to push his overall weapon’s effective range out bit further before damage falloff begins to take effect. Note: The alternate fire falloff begins from where the scrap projectiles are formed, not from Roadhog’s firing position.

Developer Comment: These changes help Roadhog be much more aggressive when looking for hook targets or blocking for his team. The combination of these effects significantly increases Roadhog’s sustainability and survivability.

Developer Comment: Roadhog’s head was abnormally large compared to similarly-sized characters, so we’re reducing its size to increase his survivability. The Scrap Gun changes reduce the power of his hook combo and alternate fire burst damage potential while still keeping his DPS roughly the same.

Developer Comment: The Roadhog changes overall reduce the power of his hook a bit, but his gun is now more effective when not using the hook.

Developer Comment: The hook should now feel more consistent for Roadhog players, but it should also feel more reasonable to his enemies, as they cannot be hooked or pulled around corners anymore.

Developer Comment: Game-changing ultimate abilities were coming up a bit too frequently. This change helps keep them in check while still allowing them to be powerful.

Developer Comment: This change means that hooked targets will be less likely to slide along walls, potentially ending up in an odd place after they've been reeled in.

19 Jul 2016
*Self-healing abilities now charge ultimate abilities. As a result, some heroes’ ultimate costs have been adjusted (see below).