Sam is the father of Fareeha Amari. He and Ana had conceived her prior to the Omnic Crisis. It is unknown whether they were married, or just lovers, and whether or not Sam shares the Amari name.

Sam was first seen in Reflections, eating dinner with his daughter in Canada. 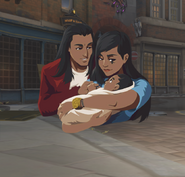 Sam and Ana with baby Fareeha.

Retrieved from "https://overwatch.fandom.com/wiki/Sam?oldid=90240"
Community content is available under CC-BY-SA unless otherwise noted.