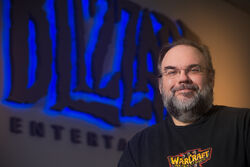 As principal designer at Blizzard Entertainment, Scott Mercer works on a variety of system designs for Overwatch: a highly stylized team-based multiplayer shooter set on a near-future earth, featuring a diverse cast of extraordinary characters embroiled in an epic, globe-spanning conflict. As a development operative with a broad skill set, Scott also contributes to his team’s mission through character design and implementation.

Mercer is a long-time Blizzard veteran who joined the company in 1997. He started as a level designer on the StarCraft: Brood War expansion, before moving on to become a game designer on Warcraft III: Reign of Chaos and The Frozen Throne expansion. More recently, he served as a lead encounter designer on World of Warcraft.

Retrieved from "https://overwatch.fandom.com/wiki/Scott_Mercer?oldid=89707"
Community content is available under CC-BY-SA unless otherwise noted.