The Shimada clan is a clan of ninja based at Shimada Castle, in Hanamura.[1]

The clan was founded centuries ago,[2] and operated out of Shimada Castle, with the town of Kanezaka serving as their seat of power.[3] It operated on a system where the eldest son of the family's head would become leader.[2]

While they were criminals, the Shimada understood that honor and loyalty forge the strongest bond between ruler and ruled. They asked much of those who followed them, but they inspired them to give it. And in return, the Shimada clan led with integrity and treated the people of Kanezaka with respect.[3]

The Shimada's power grew over the years, enabling them to build a vast criminal empire that profited from lucrative trade in arms, illegal substances,[2] and assassination.[1]

A snag was reached when Hanzo Shimada was expected to replace his deceased father, Sojiro. Upon his father's death, the clan elders instructed Hanzo to straighten out his wayward younger brother, Genji Shimada, so that he, too, might help rule the Shimada empire. When his brother refused, Hanzo was forced to kill him. This act broke Hanzo's heart and drove him to reject his father's legacy, ultimately leading him to abandon the clan.[2] Seeing this as betrayal, the clan declared Hanzo an enemy and assassins were sent time and time again to kill him.[4]

The Shimada faced another hurdle as they were targeted by Overwatch. In an ironic twist, Genji had survived Hanzo's attempted assassination, and been rescued by Overwatch, turned into a cybernetic ninja. Transformed into a living weapon, Genji single-mindedly set about the task of dismantling his family's criminal empire, a task in which he apparently succeeded. His mission complete, Genji left Overwatch.[5]

In the modern day, the Shimada appear to still be active, at least in limited capacity.[6] However, the Hashimoto clan took over Kanezaka, where the Shimada once held sway.[3] 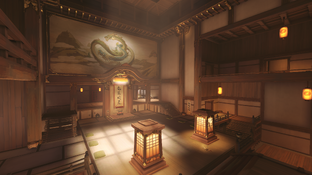 In the background of Dragons, Sojiro[7] narrates an ancient legend of the Shimadas.

But the two brothers argued over who could better rule their land. Their quarrel turned to rage and their violent struggle darkened the skies, until the Dragon of the South Wind struck down his brother, who fell to earth, shattering the land. The Dragon of the South Wind had triumphed, but as time passed and he realized his solitude, the sweetness of victory turned to ash.

For years, the bereft dragon's grief threw the world into discord, and he knew only bitterness and sorrow. One day, a stranger called up to the dragon and asked, "O Dragon Lord, why are you so distraught?" The dragon told him, "Seeking power, I killed my brother; but without him, I am lost." The stranger replied, "You have inflicted wounds upon yourself... but now, you must heal. Walk the earth on two feet as I do; find value in humility. Then, you will find peace."

The dragon knelt upon the ground. For the first time he was able to clearly see the world around him, and he became human. The stranger revealed himself as his fallen brother; reunited, the two set out to rebuild what they had once destroyed.