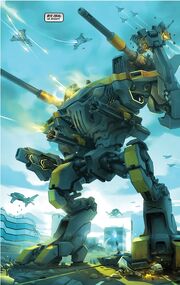 The Titan is a type of bi-pedal omnic.

Titans were first conceived by the Ironclad Guild prior to the Omnic Crisis, with Torbjörn Lindholm playing a large role in their conception. The idea was to create a walker that would aid in the construction of high-rises. During the Omnic Crisis, the Titan design was pilfered by the omnics and retrofitted into a weapon of war. These units possessed infrared sensors and an abundance of heavy firepower, and were proficient in spotting and eliminating targets and laying waste to entire cities. The omnics also installed an internal drone defense system. The Titan itself is controlled from a cockpit.

A Titan was piloted by Sven decades after the Omnic Crisis when he unleashed it on the city of Boklovo, shrugging off anything the Kurjikstani military threw at it. While Torbjörn was eventually able to deactivate the walker, it wasn't before a large portion of the city was destroyed.[1]

A Titan (or similar walker) was utilized by Null Sector in its attack on Paris. The walker was equipped with wrist-mounted missile launchers, energy weapons for arms, and a energy weapon located in its chest. The Titan was eventually destroyed by Overwatch after a protracted battle.[2]