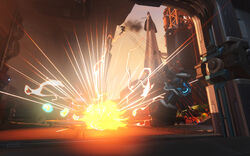 The use of these abilities requires filling an ultimate meter with "charge". This charge builds over time, or if certain actions are performed (hitting enemies with your standard attack or blocking with your shield) this ultimate meter charges faster than normal. Once expended, the ultimate meter requires a long period of time to refill. Each hero's ultimate meter has a different base charge rate.

There are three types of ultimate abilities: Transformation, Channeled, and Cast-time.

D.Va ejects from her mech and sets its reactor to explode, dealing massive damage to nearby opponents.

If her armored battle suit is destroyed, D.Va can call down a fresh mech and return to the fray.

Orisa deploys a device to increase damage by 50% inflicted by allies within its line of sight.

Reinhardt forcefully slams his rocket hammer into the ground, knocking down and damaging all enemies in front of him.

After cramming a top-loader onto his Scrap Gun, Roadhog pours in ammo. For a short time, he can crank out a stream of shrapnel that knocks back enemies.

Unleashing his full powers, Sigma takes flight, lifts enemies in a targeted area, and launches them into the sky before slamming them back down.

Winston embraces his animal nature, significantly boosting his health and making him very difficult to kill, strengthening his melee attack, and allowing him to use his Jump Pack ability more frequently. While raging, Winston can only make melee and Jump Pack attacks.

Wrecking Ball deploys a field of long-lasting proximity mines which explode on contact with enemies.

Zarya launches a gravity bomb that draws in enemy combatants and deals damage while they’re trapped.

Ashe summons her trusted omnic sidekick, B.O.B., who charges forward and knocks enemies into the air, then lays down suppressing fire with his arm cannons.

In Tank mode, Bastion extends wheeled treads and a powerful long-range cannon. The cannon’s explosive shells demolish targets in a wide blast radius, but Bastion can only remain in this mode for a limited time.

Doomfist leaps into the sky, then crashes to the ground, dealing significant damage.

Genji brandishes his katana for a brief period of time. Until he sheathes his sword, Genji can deliver killing strikes to any targets within his reach.

Junkrat revs up a motorized tire bomb and sends it rolling across the battlefield, climbing over walls and obstacles. He can remotely detonate the RIP-Tire to deal serious damage to enemies caught within the blast, or just wait for it to explode on its own.

Mei deploys a weather-modification drone that emits gusts of wind and snow in a wide area. Enemies caught in the blizzard are slowed and take damage; those who linger too long are frozen solid.

Pharah directs a continuous salvo of mini-rockets to destroy groups of enemies.

)
"Justice rains from above!"

In a blur of motion, Reaper empties both hellfire shotguns at breakneck speed, dealing massive damage to all nearby enemies.

Soldier: 76’s pinpoint targeting visor “locks” his aim on the threat closest to his crosshairs. If an enemy leaves his line of sight, Soldier: 76 can quickly switch to another target.

Sombra discharges electromagnetic energy in a wide radius, destroying enemy barriers and shields and hacking all opponents caught in the blast.

Symmetra deploys a massive energy barrier which prevents ranged attacks and is big enough to cut through the entire map.

Tracer lobs a large bomb that adheres to any surface or unfortunate opponent it lands on. After a brief delay, the bomb explodes, dealing high damage to all enemies within its blast radius.

Torbjörn creates pools of molten slag that deal massive, sustained damage (plus bonus damage to armor), and can prevent enemies from moving through key locations.

Widowmaker’s recon visor allows her to see the heat signatures of her targets through walls and objects for a moderate amount of time. This enhanced vision is shared with her allies.

After Ana hits one of her allies with a combat boost, they deal more damage, and take less damage from enemies’ attacks.

Baptiste creates a matrix that doubles the damage and healing effects of friendly projectiles that pass through it.

Brigitte moves faster and provides all nearby allies with armor that lasts until it’s removed by damage.

Protective waves radiate out from Lúcio’s Sonic Amplifier, briefly providing him and nearby allies with personal shields.

Valkyrie unleashes the full power of Mercy's Valkyrie Suit, enhancing her weapons and abilities for 15 seconds.

Moira channels a long-range beam that both heals allies and bypasses barriers to damage her enemies. While channeling this ability, Moira's movement speed increases greatly, but she cannot perform any other actions.

In Junkenstein's Revenge, the AI controlled Witch of the Wilds radiates restorative power, bringing dead allies back into the fight with full health.

In Lúcioball, Lúcio is able to temporarily boost his own movement speed and jump height. While the boost is active, he can also use Soundwave more frequently.

In Yeti Hunt, Mei tosses out a giant, metal-toothed trap. Should an enemy wander too close to the trap, it clamps on, injuring and immobilizing them.

Mercy radiates restorative power, bringing nearby dead allies back into the fight with full health.

After overheating his personal forge, Torbjörn gains a significant amount of armor. He also attacks (and builds and repairs turrets) far faster than normal.

Symmetra places a teleporter exit pad at her current location, and connects it to a teleporter entry pad at her team’s starting point. Allies can travel through the entry pad to the exit pad instantly, enabling them to return to the fight swiftly after being defeated.

)
"Teleporter online, I have opened the path."

Symmetra deploys a wide-radius generator that provides increased shielding to her entire team.

)
"Shield Generator online, you are protected."

Ultimate abilities have a base build rate in seconds, and can also be built by dealing damage. Some heroes can also build ultimate through their healing abilities.

Retrieved from "https://overwatch.fandom.com/wiki/Ultimate_ability?oldid=97720"
Community content is available under CC-BY-SA unless otherwise noted.