The "Venice Incident"[1] was an event that occurred eight years prior to the present day. It was a turning point in the history of both Overwatch and Talon. 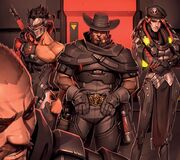 The team is assembled

The incident's roots lay with a series of Talon attacks on Overwatch facilities in Oslo, and more notably, Rome. A bomb set by a Talon agent leveled the Blackwatch Rome facility and killed numerous members of its staff. Both attacks were done at the behest of Antonio, a businessman with connections to both Talon and the Italian government. Overwatch commanders Jack Morrison and Gabriel Reyes were at a crossroads as to how to respond. Morrison favored working with the Italian government. However, Reyes pointed out that Antonio's connections ran deep, and he'd be exonerated if arrested. Reyes pressed for Antonio to be brought in for questioning, but Morrison pointed out that unilateral action by Overwatch would violate Italy's sovereignty. Still, he left the decision to Reyes to make.

On that note, Reyes assembled a team of Blackwatch agents, consisting of himself, Jesse McCree, Genji Shimada, and Moira O'Deorain. They headed for Rialto.[2]

The Blackwatch team arrived in a Venice safehouse and set up survaillance on the manor. They found Talon soldiers patrolling the grounds.[3] They originally planned to infiltrate the manor by posing as the band employed at the manor, but this idea wasn't followed up upon. When night fell, they infiltrated the manor.[3] They made their way through its interior, killing and/or incapacitating numerous Talon guards. Upon reaching Antonio's office, they found him there, not surprised to see them. Nor was he intimidated, as he pointed out that Overwatch abducting a "respected businessman" would be a public relations nightmare. Furthermore, even if they did take him, his "friends" would have him released within a week. After some thought, Reyes said "you're right" and shot Antonio, the force of the blast sending him through his office window. It was the shot that stirred the hornet's nest, alerting Talon to their presence, leaving them with "Plan B"—fight their way out. In that, they succeeded, and despite numerous Talon soldiers attacking them, they successfully exfiltrated the site.[4] 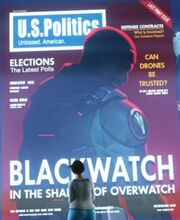 The existence of Blackwatch is revealed

Reyes and McCree were debriefed by Morrison, Ana Amari, and Gerard Lacroix. Morrison was incensed by what had occurred, and demanded that Reyes tell him what actually happened, plausible deniability be damned. Reyes snidely responded to Morrison's demands, but nonetheless recounted the Rialto mission.[3] In his debrief, he pointed out that things don't always go according to plan, and stood by the decisions he had made.[5]

Antonio's warning about the public relations issue proved to be prophetic. Because of Reyes's actions, Blackwatch's existence had been revealed to the public.[4] There were stories of assassination, coercion, kidnapping, torture, and worse. Governments called on the UN to shut down the "aggressive and repeated violations of many countries' sovereignty."[6] A special UN committee launched a lengthy and highly secretive investigation into the claims. As the UN investigation proceeded,[7] public distrust swelled.[6] The investigations revealed the existence of O'Deorain's illicit research within Overwatch, and the organization disavowed any knowledge of her.[8] Thus began the twilight years of Overwatch—Blackwatch would be placed on suspension one year later[9] and a few years after that, Overwatch would be disbanded.[6] The incident would be called "the Blackwatch mission that changed everything."[3] History would indicate that this was correct.

Talon, for its part, continued to operate. Antonio's death opened up a void in Talon that new faces filled, including Maximilien and Akande Ogundimu.[4] Both of them would end up as members of Talon's inner council.[1]