Zarya is a Tank hero in Overwatch.

Deploying powerful personal barriers that convert incoming damage into energy for her massive Particle Cannon, Zarya is an invaluable asset on the front lines of any battle.

10 seconds
Type
Ability
Aim Type
Self
The Particle Cannon can emit a personal barrier that shields Zarya against incoming attacks, redirecting their energy to enhance her weapon’s damage and the width of its beam.
Health:
200
Area of effect:
1.5 meter radius
Duration:
2 seconds
Cooldown:
10 seconds
Create a damage barrier around you.
Details:
Example Video

Zarya is a challenging Tank to play, though one of the most rewarding when played well. She gains Energy by absorbing damage with her barrier abilities, increasing her own damage substantially. At maximum Energy, she is a monstrous threat to the enemy team, tearing them apart in seconds with her Particle Cannon. Her Ultimate has some of the highest playmaking potential in the game, with the ability to trap entire teams in a single spot for her allies to fire upon. All of this comes with a severe weakness: she is the softest of the Tanks, with the lowest base Health out of them (save for Orisa), no movement abilities, and only an infrequent, short-duration barrier to protect her and her team. She is heavily reliant on her teammates to charge up her Energy, provide cover/healing when she is out of position, and coordinate with her ultimate.

"Together we are strong."

Aleksandra Zaryanova is one of the world's strongest women, a celebrated athlete who sacrificed personal glory to protect her family, friends, and country in a time of war.[1] As a soldier in the Russian Defense Forces, she is proud to use her strength to protect the ones she loves.[2]

Zarya is distrustful of omnics, even those who seek co-existence with humanity.[3] One of her personal heroes is Vasily Alekseyev. She enjoys eating cabbage pierogis.[4] 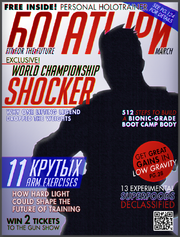 A magazine article on Zarya

Aleksandra was born in a remote Siberian village that was on the front lines of the Omnic Crisis, which began some thirty years ago. Although Russian forces defeated the omnics and shut down their omnium, the region was devastated by the conflict. Only a child at the time, Aleksandra was surrounded by the post-war destruction, and as she grew older, she swore that she would gain the strength to help her people recover.

Focusing on weightlifting and bodybuilding, Aleksandra was identified by the national athletics program as a potential star. She trained extensively, moving up the ranks while representing her country, and was expected to shatter longstanding records in the upcoming world championships.

But on the eve of the tournament, an attack came from the long-dormant Siberian omnium, and her village was thrust into war once again. Aleksandra immediately withdrew from the competition and rushed home to enlist in the local defense forces, sacrificing the life of fame and fortune she might have had.[1] The magazine Богатыри reported on her departure.[5] Now a member of the Russian Defense Forces, Zarya was deployed to the Krasnoyarsk front in Siberia.[6] Serving as a soldier, Zarya became a symbol to some, a stalwart fellow soldier to others. But for Zarya, it was a chance to use her great strength to protect the ones she loves.[1]

As the Siberian omnium continued its attacks, Atlas News interviewed Zarya.[7] She achieved the rank of sergeant within the RDF. Over the course of her service, she destroyed hundreds of omnics.[8]

Zarya spent Christmas fighting against the omnics alongside her fellow soldiers.[9]

Zarya is brought before Katya Volskaya

After a trio of Talon agents tried to assassinate Katya Volskaya of Volskaya Industries, Zarya was summoned to her office. After being asked whether she knew why she was here, Zarya responded that she believed she did.[10] However, after being told about the nature of her mission, to track down Sombra (who was among the Talon agents who'd tried to assassinate Katya, Zarya realized that the assignment hadn't been what she'd expected. She told Katya that a spy would have been a better choice. Katya shrugged the suggestion off, and sent Zarya on her way. Over weeks of searching, she visited Lijiang Tower, Hanamura, and London. She reported to Katya that her leads had run dry. Katya sent Zarya to Numbani to meet a hacker.

Zarya was uncomfortable in Numbani, rankled at the sight of humans and omnics living together. Her mood wasn't improved when she discovered that her hacker contact was an omnic named Lynx Seventeen. She contacted Katya, asking if she knew the hacker was an omnic, but Katya explained that sometimes, one had to ally with undesirable allies in order to fight a common enemy. Lynx showed Zarya the data they had gathered on the "Sombra Collective." Zarya explained that the supposed collective was actually a single woman, and Lynx explained that given that Sombra's calling card was a sugar skull (similar to that of Los Muertos), and had implicated Guillermo Portero for corruption. Given all that, they headed for Dorado, Mexico, where they met with Portero himself. He wished them luck, but stated that LumériCo couldn't give them any aid.

Not giving up, Zarya and Lynx began knocking on all the doors of Dorado, asking hundreds of people per day as to whether they'd seen Sombra. None of the people had seen Sombra, or if they had, weren't admitting it—Zarya noticed that they saw Sombra as being akin to Stepan Razin; robbing from the rich on behalf of the poor. They achieved a breakthrough at the Panadería Las Nieblas bakery, where they met a girl named Alejandra. Playing on the girl's emotions, Zarya asked her if she'd seen Sombra, and that if she had, she'd be a "hero" to her. The ploy worked, and Alejandra took them to the warehouse Sombra was operating from. Lynx deactivated the structure's security system, and as they did so, they discussed Zarya's history with the omnics, and her negative sentiment towards them. Their bickering was ended as Sombra revealed her presence. The two engaged in a battle of bullets and words, which ended as Zarya incapacitated Sombra with a graviton surge. 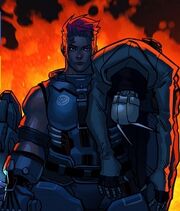 Sombra demanded that Zarya let her go, or otherwise, the world would know Katya's secret, that she'd been receiving technology from omnics in order to fight against the Siberian omnium. Sombra also explained that she actually wanted Katya in power, as a 'friend' to help her peel back a global conspiracy she'd uncovered. Zarya was skeptical, but her hand was forced as Lynx collapsed—when them had hacked Sombra in Numbani, Sombra had hacked them right back, and now, the program was kicking in. Also, the warehouse would detonate in one minute's time. She decided to let Sombra go and rescued Lynx, escaping the blast with them. When they asked why she'd rescued them, Zarya stated that she didn't know, and that a few days ago, she might have killed them herself. She stated that she would head back to Russia to continue the fight against the Siberian omnics.

After parting ways with Lynx, she conversed with Katya again. Zarya asked as to why she hadn't confessed where she got her technology from, but Katya explained that her secret dealings with omnics had to remain secret for now. One day, Russia would understand, but that day wasn't here yet. Zarya agreed to keep her secret.[8] 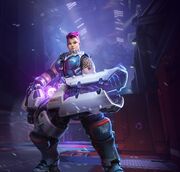 Zarya as she appears in Heroes of the Storm

Developer Comment: Zarya’s overall damage output is in a good spot but the secondary fire was left feeling a little too weak after the last set of changes.

Developer Comments: Zarya’s damage greatly increases when at high energy, while also gaining increased beam size and a larger explosion radius. This often allowed Zarya to deal too much damage and made the explosions from the Alternate Fire on her Particle Cannon nearly impossible to avoid. This change will still allow Zarya to deal a lot of damage, but makes it more difficult to actually apply the damage.

Developer Comment: The smaller radius on Graviton Surge makes it more reasonable for her enemies to try countering it by staying spread out, as well as putting more focus on Zarya to position the ultimate correctly to impact the most players possible. However, the intent of these changes isn’t to lessen Zarya’s overall power significantly so we’re reducing her energy drain rate, which should keep her energy higher on average resulting in more damage and quicker ultimate charge times. Overall, this takes some power out of her ultimate and distributes it else ware to add more counter play against her.

Developer Comment: In the past, the abilities that allowed heroes to escape Zarya’s Graviton Surge felt fairly arbitrary. We’re cleaning this up and increasing Graviton Surge's overall power by rendering all movement abilities unusable when an enemy is trapped.

Developer Comment: This is actually reverting a change that we made a few patches ago, which made players immune to knockbacks if they were hit by an effect from inside her barrier. This had some negative side effects, such as making targets immune to knockbacks from effects that pierce barriers, like Reinhardt’s charge and Winston’s Primal Rage punches. Now, these will cause knockback again. This does not affect knockbacks from effects that originate from outside her barriers, such as Pharah’s Concussive Blast. Those will still be blocked by the barriers, not causing any knockback.

Developer Comment: This is a bug fix, but we think it's significant enough to warrant a separate note. We've had a long-standing bug that caused "piercing" damage to hit Zarya's barrier twice. Sometimes this benefited Zarya (for example, jumping in front of Reinhardt's Fire Strike was a good way to generate a large amount of energy quickly), and sometimes it really hurt her (Genji’s Dragonblade, for example, would cut through her shield in one swing, instead of two). This change isn’t intended to buff or a nerf to Zarya. We're simply trying get her abilities working as they should, and we’ll keep an eye on how it affects her balance.

Developer Comment: Considering her potential damage output, Zarya was starting to feel like a mandatory pick in most situations. Rather than reduce her damage output, this change makes achieving her maximum power and damage output slightly more difficult.