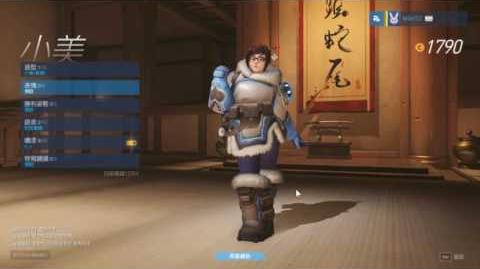 Mei-Ling Zhou (周美齡/Zhōu Měilíng) was an innovative member of Overwatch's ecological studies whose technology was used around Asia for climate preservation. She was assigned to work with other scientists Watchpoint: Antarctica when a polar storm cut off their communications and left them stranded. They entered cryostasis to survive until a rescue mission was made. By the time they were found, Mei was the only survivor, and Overwatch had been disbanded.

Winston recommended that Mei keep a journal of her travels. She went to Mount Logan, Canada to test her technology, took a quick stop in Los Angeles on Halloween, then went to Nepal for an unknown project.

At some point, Mei saved a nest of endangered arctic wildlife from a collapsing glacier.[1]

Despite what she has been through, Mei is very kindhearted and positive, showing compassion for others and having a desire to preserve Earth's ecosystem for generations to come. She hates bullies, as shown by one of her quotes and interactions with Junkrat. She wishes to learn and is even inspired by Tracer as well as Winston.