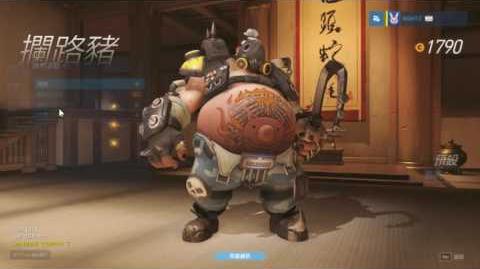 Mako Rutledge was one of the residents of the Outback when its omnium and the surrounding area was gifted to the omnics. He and other Outback residents were displaced, and formed the Australian Liberation Front to take back the land. The ALF fought the omnics until they sparked an explosion that irradiated the outback.

Mako adapted to the new environment by donning a mask and riding the broken highways on his chopper. He became an enforcer, and was eventually hired by Junkrat as a personal bodyguard in exchange for half of Junkrat's profits. Together, the two went on a crime spree around the world.

In Going Legit, Junkrat and Roadhog made a deal with the CEO of Hyde Global in Sydney to rescue its workers from omnic terrorists. They found out that the 'terrorists' were actually Hyde Global drones, and that the CEO had set them up, so they hung him from the top story of his skyscraper before blowing it up.

Junkrat and Roadhog have stolen royal artifacts from King's Row, destroyed shops and trucks in Paris, robbed the arcade in Hanamura, and stolen most of the Bank of Dorado's gold in their crime spree.

Roadhog remains silent at most if not all the time, possibly due to his mask muffling his voice and the fact that he prefers not to speak and instead get things done. As his biography states, he is callous and sociopathic, showing no remorse to his victims and often laughing while on the battlefield.

In spite of his ruthless demeanor, Roadhog possesses traits that contradicts to his behavior. He seems to like stuffed animals and ice cream as conveyed in the A Moment in Crime Special Report where he steals stuffed animals from an amusement park and sabotages an ice cream truck. He also seems to care about his partner Junkrat, and is willing to protect him from causing too much trouble.