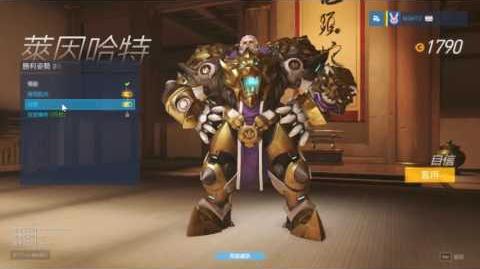 Reinhardt Wilhelm was a highly decorated German soldier when the Omnic Crisis began. He was chosen as part of the original Overwatch strike team, alongside Jack Morrison, Gabriel Reyes, Torbjörn Lindholm, Ana Amari, and Liao. Wearing his J08 Crusader Armor, he was one of the team's strongest soldiers and most passionate supporters.

Reinhardt was forced to retire before Overwatch collapsed, as he was in his late fifties and his Crusader Armor had fallen into disuse. Regardless, he kept the armor and began traveling Europe with Brigitte.

In Dragon Slayer, Reinhardt and Brigitte stopped in a small town that had been taken over by The Dragons. Brigitte helped to repair the Crusader Armor and Reinhardt used it to drive the gang out of the village.

At the time of the Overwatch Recall, Reinhardt was in Nuuk, Greenland.

Possessing a jolly and out-going disposition, Reinhardt is displayed to be a rather imaginative juggernaut, always wanting to bring hope and ambition towards the people. He lives by a code of valor and justice, much like the crusaders of medieval history.Although he is at an old age, he never wants to admit it and vows to fight until his last breath, according to his interactions with Mercy. He also really cares about his fellow comrades of Overwatch, as shown by his anger when watching Torbjörn die in a match as well as what he had to say at his former commander Jack Morrison's funeral: "He devoted everything he was to Overwatch. He was our moral compass. Our inspiration. Our friend."

While outside of battle, Reinhardt has multiple different hobbies that he enjoys doing. He seems to show concerns about his appearance such as his tan and hairstyle, as shown by his voice lines when in Watchpoint: Gibraltar and interacting with Pharah. His favorite food is currywurst, and he loves listening to classic music, such as the works of David Hasselhoff.

Reinhardt is also assumed to be a fan of D.Va, as specified when he asks her for an autograph.